Outlook: The energy complex has continued to climb higher this morning, boosted by supportive vaccine news and the prospects of a delayed production increase from OPEC+. The next meeting of the OPEC+ oil ministers is on Monday, November 30. Expectations are that the group will decide to delay the planned 2 million bpd production increase that was originally scheduled for January 2021. A three – six month delay is anticipated. Traders and analysts will be keeping a keen eye on any developments in regard to the next OPEC+ meeting. Confirmation of the delayed production increase will likely send prices higher. Despite the news of two different vaccines with around 95% efficacy, coronavirus cases are going to continue to be an item that weighs on the complex. The U.S. continues to hit record high daily cases on a seven day average, with the latest high being nearly 171,000 cases per day as of Sunday, according to data from Johns Hopkins University. U.S. cases climbed past 12 million over the weekend. AstraZeneca announced this morning that their Covid-19 vaccine shows an average of 70% efficacy in terms of preventing the virus. Two different dosing strategies were tested, one that showed a 90% efficacy, while the other showed a 62% effectiveness. The positive news from AstraZeneca has added to the overall bullish sentiment that has entered both the energy and equity sectors. The DJIA and the S&P 500 are both trading above even this morning, while the Nasdaq Composite has been mostly flat. Shares of cruise lines and airlines have jumped in response to the Covid-19 vaccine news.

The amount of crude oil held on tankers has shrunk to the lowest level since April. Tanker inventories have fallen to 114.69 million barrels as of November 20, down 7.7% from the week prior, which is the lowest level achieved since the spring. As pictured below, the contango in Brent has tightened. A wider spread allows traders to purchase crude and store it, selling it later when prices are more advantageous. A shallower contango would suggest that storage may not be economically feasible, as prices now may be better than in the future. The decline in global inventories held in storage may have the market starting to consider an under-supplied scenario. 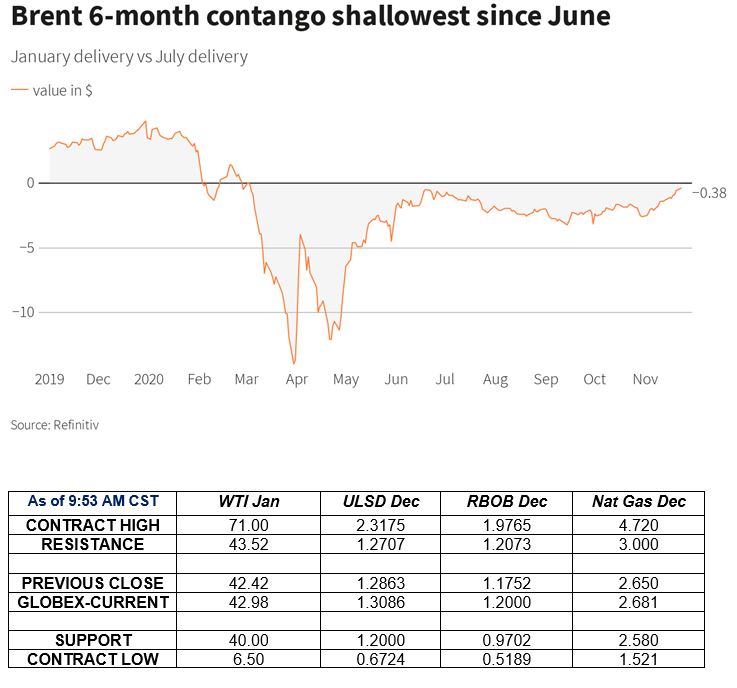