Outlook: Energy prices have fallen this morning as traders and market analysts await a decision from OPEC+. The OPEC+ energy ministers are holding meetings today and tomorrow, where it will be determined whether or not the group will continue cutting 7.7 million bpd, or if they’ll increase production in January as originally planned. It has been reported that the group failed to agree on policy in informal discussions held over the weekend, with opposition coming from the UAE and Kazakhstan. Market expectations are that the group will extend the current production cut for an additional three months. Goldman Sachs has stated that if OPEC+ continues to reduce output by 7.7 million bpd through Q1 of 2021, global inventories will draw down by 1 million bpd during that time. Providing the market some support and preventing a further sell off is the news from Moderna that their Covid vaccine is more than 94% effective. Moderna said that it will request emergency clearance from the FDA later today, which would mean that the first doses of the vaccine would be available within just a few weeks if the authorization were granted. Moderna would be the second company to apply for the authorization, Pfizer being the first on November 20. Despite the positive vaccine news, equities have started the day in the red. All three major averages are trading well below even. Pressuring equities is the news that the Trump administration may blacklist Chinese chipmaker SMIC as well as the national oil and gas producer CNOOC. 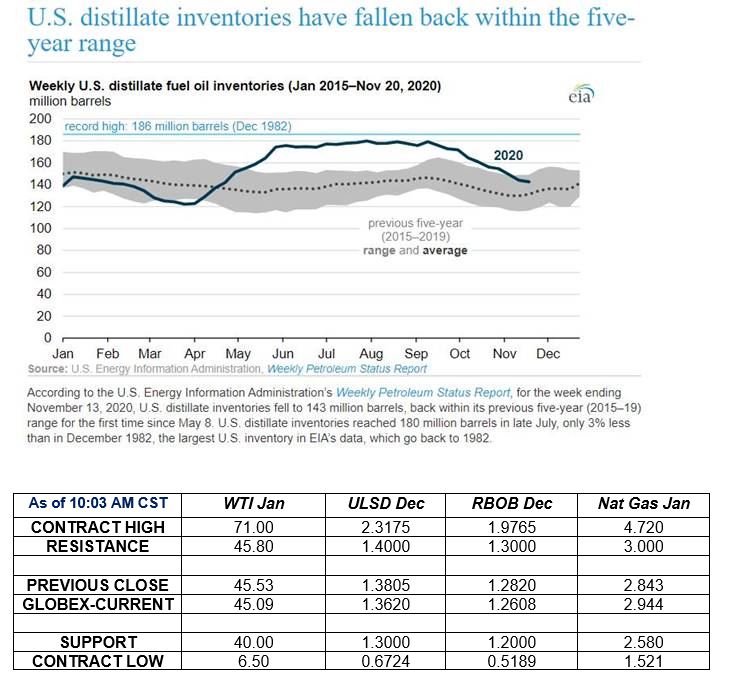