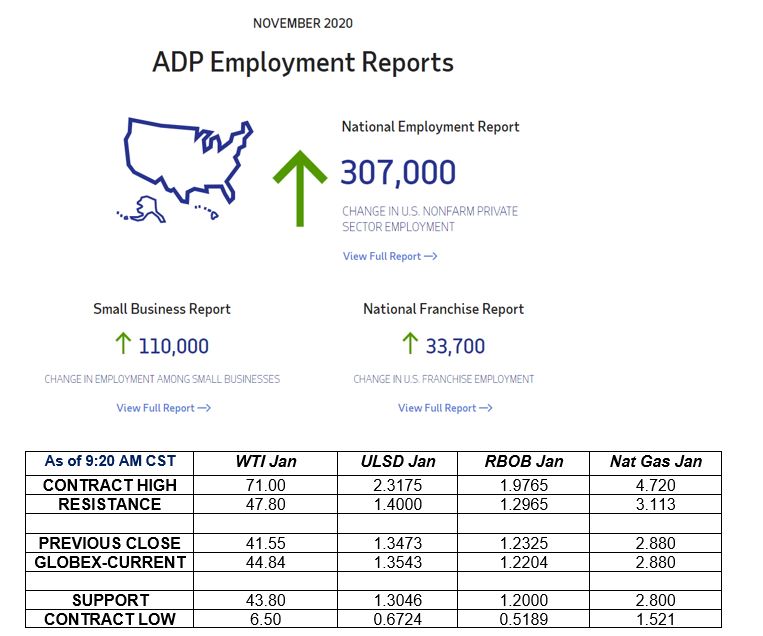 Outlook: Energy markets have moved higher this morning after trading mixed earlier in the day. Crude and products are now all trading above even. Providing support is the news that the U.K. will become the first country to authorize the Pfizer/BioNTech vaccine for emergency use. The vaccine will be rolled out in the country by next week. Front line health care workers and the elderly will be the first to receive the vaccine. Emergency use approval is still under review by the FDA in the U.S. BioNTech said today that the delivery of 40 million doses to the U.K. will occur throughout 2020 and 2021, but being as the Pfizer/BioNTech vaccine requires 2 doses, 40 million doses will be enough to vaccinate about one third of the 66 million people living in the U.K. Yesterday afternoon an industry group released their weekly inventory report and showed that U.S. crude inventories rose 4.15 million barrels in the week ending November 27. They also reported that gasoline inventories rose 3.4 million barrels, while distillate stocks rose 330,000 barrels. The more relied upon Weekly Petroleum Status Report from the EIA will be released this morning at 9:30am CST. Equities are weaker to start the day as a worse than anticipated private payroll report from ADP has pressured markets lower. ADP reported that private payrolls grew at their slowest pace since July. Companies hired 307,000 workers in November, well below the 475,000 estimate from a survey of economists by Dow Jones.