12.3.20 Energy markets have been mixed this morning as the complex awaits a decision from OPEC+

Outlook: Energy markets have been mixed this morning as the complex awaits a decision from OPEC+. The group is holding a meeting today to determine policy for 2021. OPEC+ originally planned to increase production by nearly 2.0 million bpd starting in January 2021, but as cases of Covid-19 have continued to rise and have crimped global demand, the group is weighing options to help bring equilibrium to the market. Industry expectations are that OPEC+ will delay the production increase for at least 3 months, but Russia, Iraq, Nigeria, and the UAE have all expressed interest in increasing crude supply in 2021. OPEC sources have stated that options now range from a rollover of the existing cuts to an easing of cuts by 500,000 bpd to 1.0 million bpd each month beginning in January, according to a Reuters report. Equities have been given a boost this morning as better than anticipated jobs data was reported by the U.S. Department of Labor. The S&P 500 and the Nasdaq Composite have hit record highs. The Department of Labor will release the jobs report for the month of November tomorrow.  Providing some support to energy and equities this morning is the news that House Speaker Nancy Pelosi and Minority Leader Chuck Schumer have backed the $908 billion stimulus plan that was proposed earlier in the week. Lawmakers are rushing to try and get a stimulus bill done before they leave for the holidays at the end of the year. Senate Majority Leader Mitch McConnell has stated this morning that a stimulus compromise is within reach. 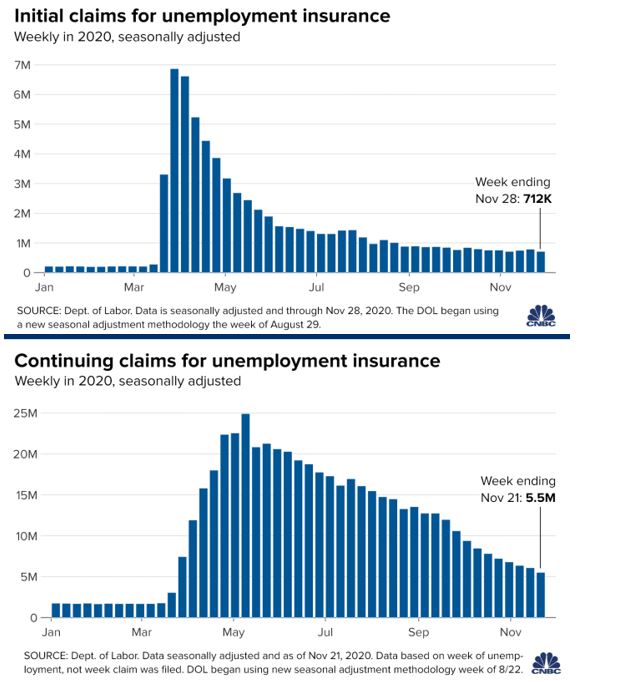