Outlook: Energy markets have continued trading higher this morning. Yesterday the market received some clarity from OPEC+. The group has agreed to increase production by 500,000 bpd beginning in January, reducing the overall output cut to 7.2 million bpd. Production quotas will be reviewed and adjusted every month as the group sees fit. The increase is much smaller than originally planned, as OPEC+ had scheduled to increase production by nearly 2.0 million bpd beginning next month. Market sentiment had believed that OPEC+ would continue the 7.7 million bpd cut through Q1 of 2021. Despite the agreed upon increase, market reaction has remained positive. Macroeconomic support from vaccine headlines as well as refreshed stimulus negotiations are providing a rosier outlook for the complex. According to FDA officials, both the Pfizer/BioNTech and Moderna coronavirus vaccines should be granted an emergency use authorization sometime next week. Yesterday it was announced that Pfizer had scaled back its Covid-19 production targets for 2020 to 50 million doses, down from a prior estimate of 100 million doses. The Pfizer/BioNTech vaccine requires two doses, meaning that 50 million doses would be enough to immunize 25 million people. The company cited supply chain issues for the scaled back target. Pfizer plans to produce 1.3 billion doses by the end of 2021. Equity markets have pushed higher despite worse than anticipated jobs data released this morning. The S&P 500 has hit a fresh all-time high. 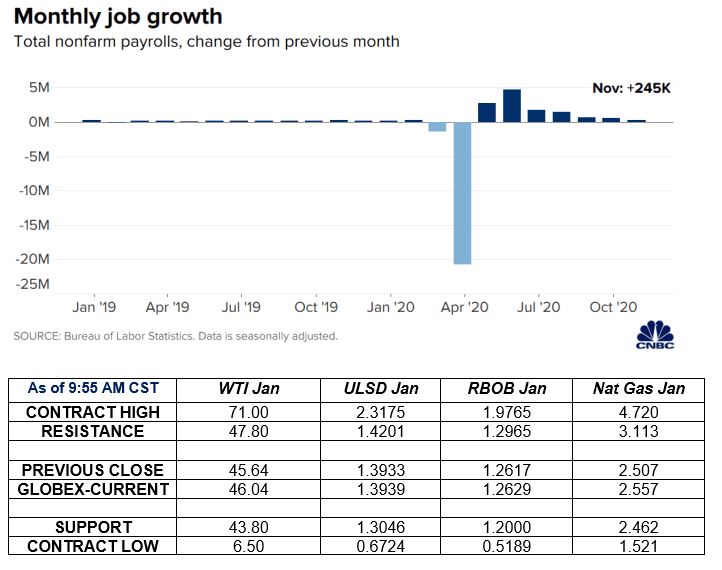