12.10.20 The energy complex has pushed higher this morning despite bearish data released yesterday from the EIA

Outlook: The energy complex has pushed higher this morning despite bearish data released yesterday from the EIA. The agency reported that combined crude, gasoline, and distillate inventories rose over 24.5 million barrels last week. Providing support to the complex this morning is the news that the FDA is scheduled to vote today on whether to recommend the approval of the Pfizer/BioNTech coronavirus vaccine for emergency use. The meeting is scheduled to run from 9:00am EST to 6:00pm EST. Emergency use authorization would mean that the FDA will allow some people to be vaccinated while the agency continues to research and evaluate the data. Full approval is expected to take months. Pfizer/BioNTech have only submitted two months of follow-up data, while the FDA typically requires six months for full approval. If an emergency use authorization is granted, the U.S. government is expected to ship 2.9 million doses of the vaccine within 24 hours to locations across the country. An additional 2.9 million doses will be distributed 21 days later for second doses. Dr. Moncef Slaoui, who is leading Operation Warp Speed, has stated that the U.S. should be able to distribute enough doses to immunize 100 million citizens by the end of February, and the entire country by the end of June. Brent crude prices have risen above $50 per barrel for the first time since March, as the U.K. has recently started to vaccinate high risk individuals. A weakening dollar has also provided a layer of support for energies this morning as well. Worse than anticipated jobs data has weighed on equities, as all three major averages have experienced a mixed trading session so far today. 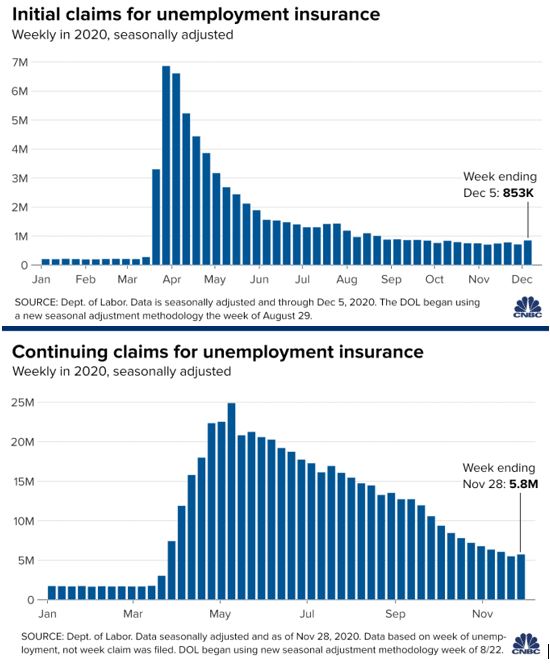