12.15.20 The energy complex has pushed higher this morning on the news that the FDA is likely to grant Moderna’s Covid-19 vaccine an emergency use authorization later this week

Outlook: The energy complex has pushed higher this morning on the news that the FDA is likely to grant Moderna’s Covid-19 vaccine an emergency use authorization later this week. An FDA staff report said the drug meets the necessary criteria to be given the authorization. The report is meant to brief an advisory panel of medical professionals who will vote whether to recommend that the FDA authorize the vaccine for emergency use. The panel of outside medical professionals is scheduled to meet on Thursday, which could mean an approval by the FDA could be granted as early as Friday. Moderna plans to ship 6 million vaccine doses within 24 hours of FDA approval. Despite multiple vaccines and the push for a stimulus bill to be passed before the end of the year, rising Covid-19 cases will continue to weigh on markets. The U.S. is recording about 215,000 new cases of the virus each day, and at least 2,300 deaths each day, based on the seven-day average, according to Johns Hopkins University. Health experts have warned that it will be several months before the general public can receive the vaccination. Congress continues to negotiate a coronavirus stimulus package, with the latest proposal coming yesterday evening. The new plan would split the original $908 bipartisan plan into two separate bills. $748 billion would be in the first bill, which would be used for small businesses and enhanced unemployment benefits. The $160 billion for business liability protections and aid to state and local governments would be in a separate bill, as these have been sticking points for some members of Congress for quite some time. Equities are once again trading higher, with all three major averages trading well above even this morning.

The International Energy Agency stated this morning that it will be several months before the world sees a “critical mass of vaccinated, economically active people.” They are predicting that as the end of the holiday season approaches and cases of Covid-19 continue to rise globally, more stringent lockdown measures will be instituted and demand could begin to be pressured lower. Meanwhile, OPEC+ is increasing production by 500,000 bpd beginning in January. The graph below shows that the supply and demand balance are near equilibrium in the first half of 2021, but once more people are vaccinated in the latter half of the year, demand will quickly outpace supply. 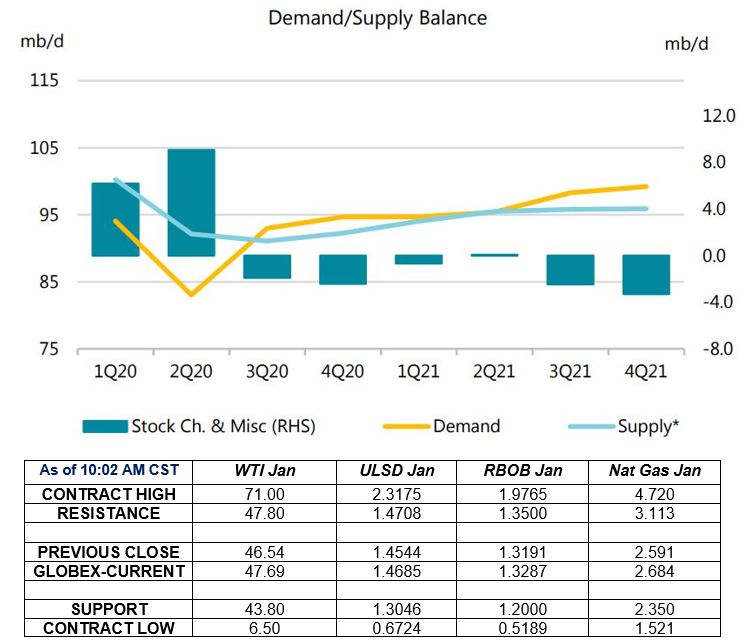