12.16.20  The energy complex has been somewhat mixed this morning as the market awaits data from the EIA

Outlook: The energy complex has been somewhat mixed this morning as the market awaits data from the EIA. Crude and ULSD have been down most of the morning, while RBOB has traded both sides of even. Pressuring energy and equity markets this morning is a monthly report from the U.S. Department of Commerce which showed that retail sales dropped 1.1% last month. Data was revised for October and showed a drop of 0.1% as well. Rising Covid-19 infections and tighter restrictions likely played a large part in the steeper than anticipated decline. On the stimulus front, Congress is reportedly getting close to a $900 billion bill that could be announced as early as today. Senate Majority Leader Mitch McConnell and Minority Leader Chuck Schumer spent Tuesday evening negotiating the bill, with both sides saying they hoped to have an agreement soon. The new bill would contain direct payments to individuals, which could come out to around $600 per person. Direct payments hadn’t been apart of any of the previous bipartisan plans. Funding for small businesses would amount to about $300 billion. Lawmakers have been pushing to get a deal done before leaving for the holidays. Despite the rosier outlook for a stimulus bill, and the possibility that the FDA will grant an emergency use authorization for Moderna’s coronavirus vaccine as early as tomorrow, equities have been mixed and choppy this morning, as all three major averages have traded both sides of even. 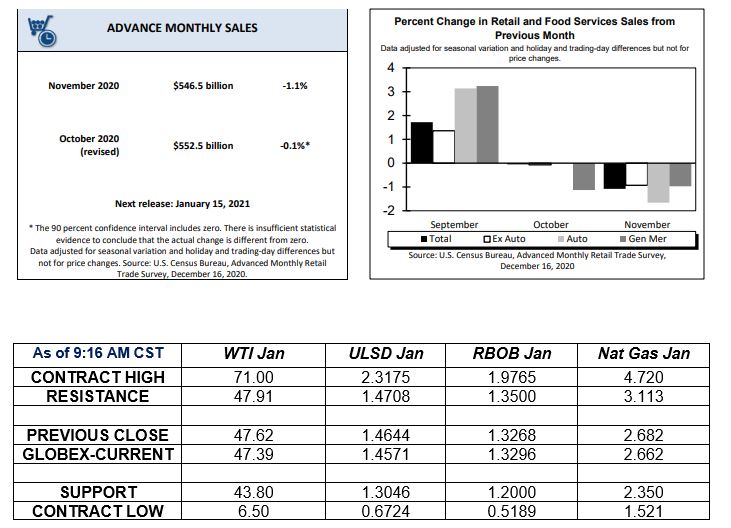