12.17.20 The energy complex has shifted higher once again as market optimism surrounding the next coronavirus stimulus bill has buoyed prices this morning

Outlook: The energy complex has shifted higher once again as market optimism surrounding the next coronavirus stimulus bill has buoyed prices this morning. Lawmakers on Capitol Hill say that they are close to an agreement on a $900 billion stimulus bill. Energy markets are taking the stimulus developments in stride, as crude and products are all well above even. Lawmakers are also working on a government funding bill. Without a new bill, funding will lapse on Saturday. Senate Majority Leader Mitch McConnell has said that Congress will not leave for the holidays until it passes more assistance. If no new stimulus bill were to be passed, around 12 million people would lose unemployment benefits the day after Christmas. An FDA advisory panel is scheduled to vote today on whether to recommend Moderna’s Covid-19 vaccine for emergency use. The FDA’s Vaccine and Related Biological Products Advisory Committee is likely to provide a favorable vote, setting up the authorization from the FDA by as early as Friday. The U.S. government can ship about 6 million doses of the vaccine once the FDA approval is received. Despite the stimulus optimism and the prospects for Moderna’s Covid-19 vaccine being given an emergency authorization, the U.S. jobs market is showing signs of worsening. Worse than anticipated jobs data from the U.S. Department of Labor was reported this morning. Equities haven’t seemed to care however, as all three major averages are trading well above even. 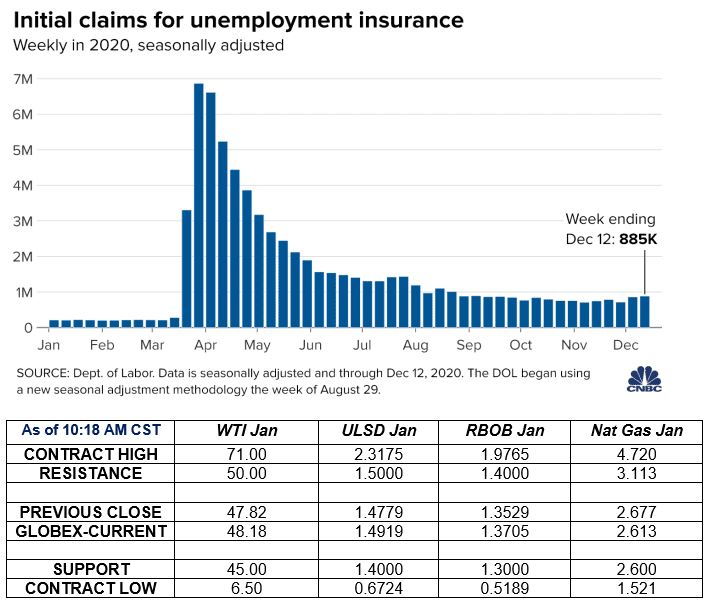