12.18.20 The energy complex has continued its upward trajectory this morning as the market awaits a final decision from the FDA in regard to Moderna’s Covid-19 vaccine

Outlook: The energy complex has continued its upward trajectory this morning as the market awaits a final decision from the FDA in regard to Moderna’s Covid-19 vaccine. On Thursday evening the FDA’s Vaccines and Related Biological Products Advisory Committee voted 20-0 in recommending Moderna’s Covid-19 vaccine for an emergency use authorization. The FDA is not required to follow the recommendation, but by all accounts it seems that the emergency use authorization will be granted by as early as today. The U.S. government will ship out around 6 million doses of the vaccine within 24 hours of the FDA’s decision. Stimulus negotiations also continue to progress. Leaders on Capitol Hill have said that they are close to an agreement that would provide $900 billion in new funding. Senate Majority Leader Mitch McConnell has stated that lawmakers will likely work through the weekend in order to get a bipartisan deal done, but added that Congress may have to pass a short-term funding bill in order to get enough time to approve the stimulus bill. Federal funding lapses on Saturday at 12:01am EST. The stimulus bill will reportedly include $600 direct payments, and about $300 billion in funding for small businesses. Equity markets have been mixed this morning, as the DJIA and the Nasdaq Composite are down slightly while the S&P 500 has held onto small gains. The stock market is expected to experience massive volume today due to Tesla entering into the S&P 500 at market close. 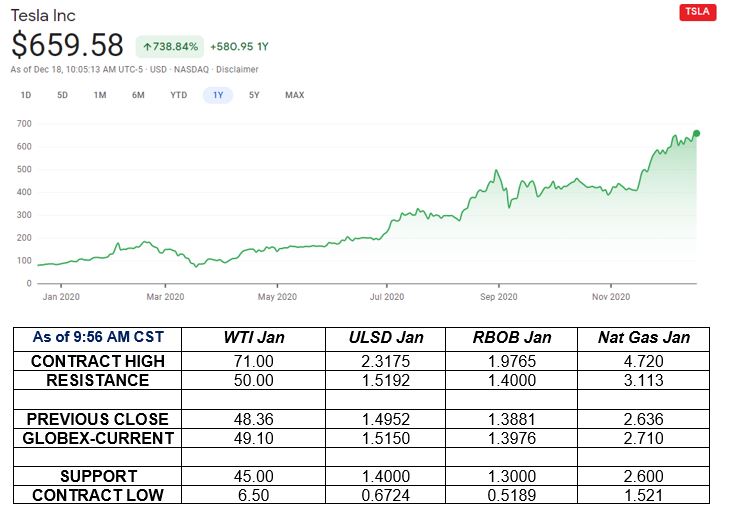