12.22.20 The energy complex has taken a step back this morning despite Congress passing a long-awaited stimulus and government funding bill

Outlook: The energy complex has taken a step back this morning despite Congress passing a long-awaited stimulus and government funding bill. Yesterday Congress passed legislation for the $900 billion coronavirus relief bill and $1.4 trillion to fund the government through September 30, 2021. The stimulus bill includes $600 direct payments to taxpayers making under a certain amount, $300 per week in federal unemployment, nearly $300 billion in the Paycheck Protection Program, and another $8 billion for Covid-19 vaccine distribution. The House approved the package in a 359-53 vote, while the Senate passed it with a 92-6 vote. Democrats have called for another stimulus bill when President-elect Joe Biden is sworn into office in 2021. The Senate runoff races in Georgia will likely play heavily into what sort of stimulus measures are pursued by the Biden administration. A divided government will make it much more difficult to pass sweeping legislation. On Monday Treasury Secretary Steven Mnuchin stated that people were going to see the $600 direct payments arrive by early next week. Providing some support from a macro perspective is the news that the U.S. Department of Commerce has adjusted the GDP growth rate higher in the previous quarter. GDP rose at a 33.4% annualized rate in Q3, up from the 33.1% increase reported last month. The economy contracted 31.4% in Q2, which was the steepest rate since the government started keeping records in 1947. Equity markets have been slightly mixed this morning as all three major averages have traded both sides of even.

India has recently recorded its lowest daily increase in Covid-19 cases since July 3, according to data from India’s Health Ministry. Despite the contraction in cases, India still has the second highest number of cases globally, surpassing 10 million this past weekend. However, having a population that exceeds 1.35 billion, which is more than 1 billion more than the U.S., infection rates per capita are quite low. As cases have started to fall, demand for road fuel has increased. Indian Oil Corporation operated its refineries at 108.4% capacity in November. Non-state owned assets operated at an average of 101.2% last month. 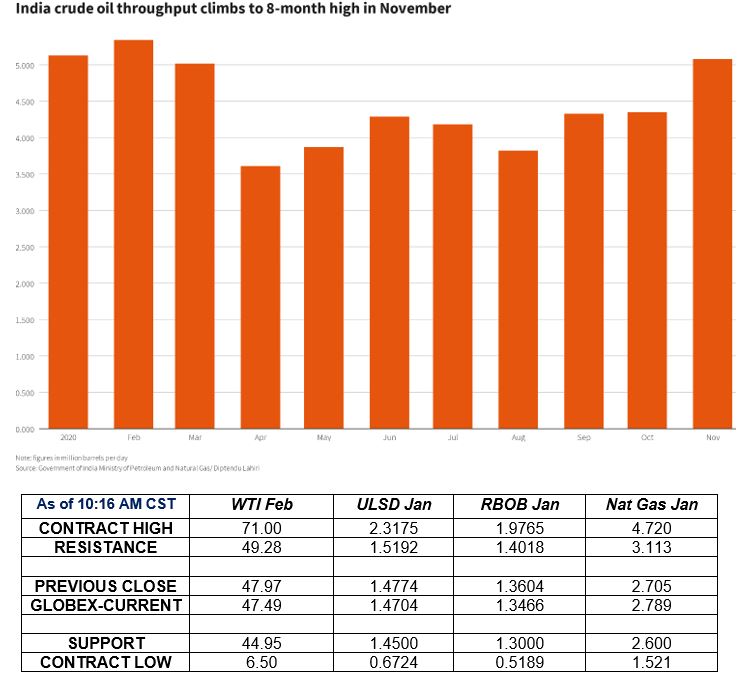