12.23.20 Energy markets have rebounded this morning as a weaker dollar and strength in equities has helped boost prices

Outlook: Energy markets have rebounded this morning as a weaker dollar and strength in equities have helped boost prices. A weak U.S. dollar makes dollar-denominated commodities cheaper to those that hold different currencies. A drop in the dollar typically corresponds with a positive price move in WTI. Supply disruptions in Nigeria have also brought some support to the market this morning. ExxonMobil issued force majeure on the Qua Iboe crude oil export terminal last week due to a fire at the facility. Operations at the terminal are expected to resume in January. Nigeria is a member of OPEC and is the largest exporter of crude oil in Africa. Better than anticipated jobs data has also lent support to energy and equity markets this morning. Jobless claims rose less than anticipated, as the number of first-time claims for unemployment insurance fell to 803,000 last week, according to data from the U.S. Department of Labor. Economists polled by Dow Jones anticipated initial claims to rise to 888,000. Initial claims for the week prior were revised higher to 892,000. Continuing claims, which requires claims to be filed for at least two weeks in a row, fell to 5.3 million. Yesterday evening President Trump called the recently passed coronavirus stimulus bill unsuitable, and urged Congress to adjust the direct payments to taxpayers to $2,000 instead of $600. President Trump did not threaten to veto the bill, and is expected to sign the legislation into law soon. Equities have been mostly positive this morning, as the DJIA and the S&P 500 are both well over even, while the Nasdaq Composite has traded both sides. 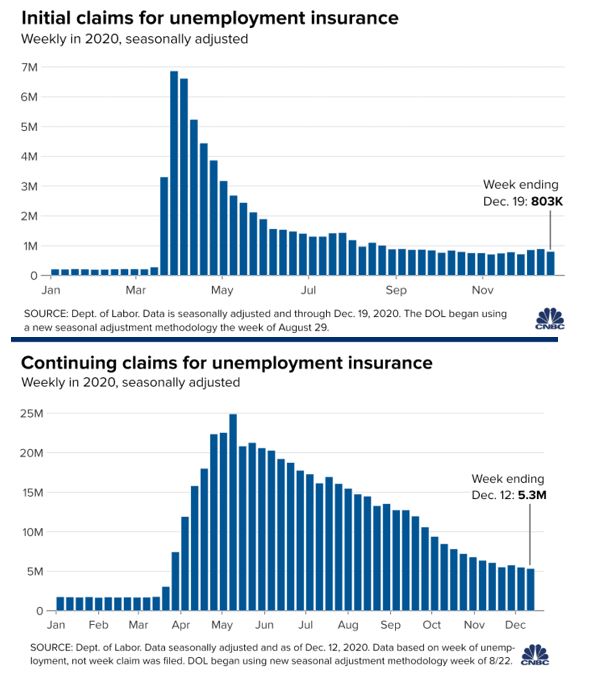