12.28.20 Energy markets have been slightly mixed this morning despite President Trump signing the coronavirus relief and government funding bills on Sunday

Outlook: Energy markets have been slightly mixed this morning despite President Trump signing the coronavirus relief and government funding bills on Sunday. By delaying the signing of the bill past Saturday, around 14 million people temporarily lost unemployment benefits. The stimulus measure extends the expanded jobless benefits into March. The $900 billion coronavirus relief bill includes $600 direct payments to taxpayers making under a certain income threshold. President Trump has urged members of Congress to increase the direct payment amounts to $2,000. The U.S. House of Representatives will vote on a measure to increase the stimulus checks to $2,000 today. Providing a boost to the energy complex this morning is the news that AstraZeneca is poised to receive regulatory approval from the U.K.’s drug regulator. The approval would allow doses of the vaccine to be distributed as early as this week. Over 30,000 new cases and over 300 deaths were reported in the U.K. on Sunday. A mutant strain of the virus that has been found to be more transmissible has led to travel restrictions in and out of the country. In the final trading week of the year, equities have opened higher. All three major averages have hit record highs at the open. It would seem that equities are poised for a Santa Claus Rally, which is a sustained increase in the stock market that occurs in the last week of December through the first two trading days of January. 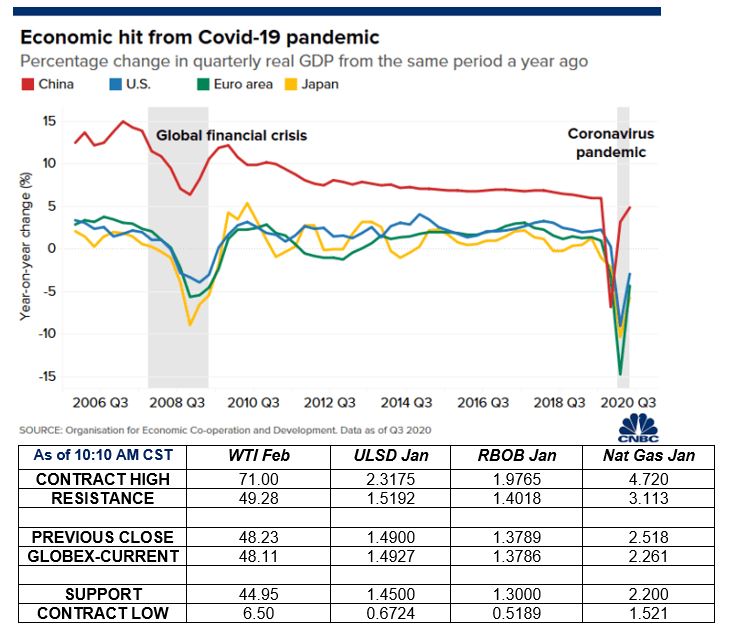