12.29.20 The energy complex has pushed higher this morning as the prospects for larger stimulus payments has helped elevate the demand outlook for crude and products

Outlook: The energy complex has pushed higher this morning as the prospects for larger stimulus payments has helped elevate the demand outlook for crude and products. Yesterday afternoon the U.S. House of Representatives voted to increase the second round of direct payments to $2,000. The measure was approved by a 275-134 vote. The expanded payments face an uphill battle in the Senate however, as Republican leadership has been against higher payments. Senate Minority Leader Chuck Schumer said yesterday that he would try to pass the legislation in the Senate today. Vaccine headlines are also bringing support to the market this morning. Novavax said that it has started a late-stage Covid-19 vaccine study. The study had been delayed twice due to issues in scaling up manufacturing, according to Reuters. The study from Novavax will enroll about 30,000 volunteers in the U.S. and Mexico, with about 65% of the volunteers receiving the vaccine. Equities have been somewhat mixed this morning after hitting intraday highs earlier in the session. Entering today’s session, the S&P 500 was up 15.6% for the year, the DJIA was up 6.5%, and the Nasdaq Composite was up more than 43% in 2020.

Major Equity Averages Performance year-to-date coming into today’s session. The Dow Jones Industrial Average was up about 6.5%, the S&P500 was up 15.6%, and the Nasdaq Composite was up about 43%. Equities typically benefit from the Santa Claus Rally, which is a sustained increase in the stock market that occurs in the last week of December through the first two trading sessions of January. 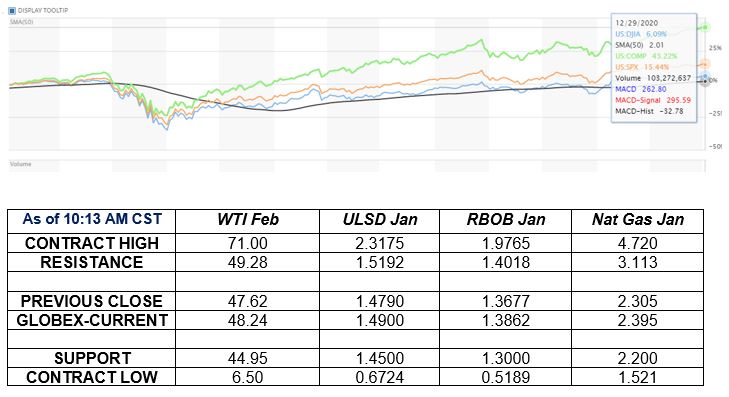