12.30.20 The energy complex had been mixed earlier this morning but has now pushed further into positive territory as crude and products are now well above even

Outlook: The energy complex had been mixed earlier this morning but has now pushed further into positive territory as crude and products are now well above even. Providing a level of support to the market comes from the news that the coronavirus vaccine developed by the University of Oxford and AstraZeneca has been given emergency use authorization in the U.K. The vaccine is expected to be shipped across the country next week. The AstraZeneca shot does not need to be kept at extremely low temperatures like the Pfizer and Moderna vaccines do, and is cheaper than the others. According to government statistics, about 600,000 people in the U.K. have received the Pfizer vaccine. The U.S. has confirmed the first case of the mutant Covid-19 strain that was first discovered in the U.K., according to health officials. The new strain is reportedly as much as 70% more transmissible. Yesterday afternoon Senate Majority Leader Mitch McConnell blocked an attempt by Senate Minority Leader Chuck Schumer to unanimously approve direct payments in the coronavirus relief bill from $600 to $2,000. McConnell then introduced a bill that would boost the size of the checks, repeal section 230, and create a commission to study election issues. The bill introduced by McConnell is unlikely to garner much support across the aisle. Despite the uncertainty for increased direct payments, equities have pushed higher this morning as all three major averages are trading above even.

The TSA has reported that the number of passengers going through security checkpoints at U.S. airports has been over 1 million in 8 of the last 12 days. Despite the increase, demand is still down about 50-55% in a year on year comparison. A full recovery in airline demand is going to be contingent on the coronavirus vaccines and their respective rollouts. 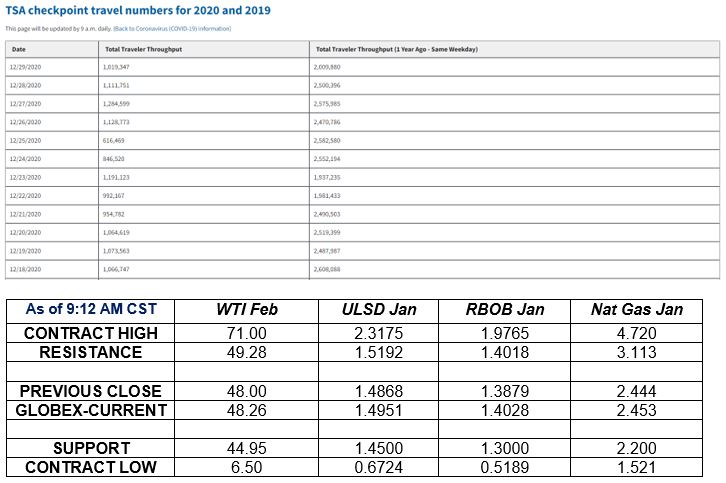