12.31.20 The energy complex has dropped this morning on the last trading session of the year

Outlook: The energy complex has dropped this morning on the last trading session of the year. 2020 was one of the most volatile years on record for the energy complex, as we saw crude oil trade below even for the first time ever. Pressuring energy markets this morning is the news that the U.S. has identified its second case of the new and more infectious Covid strain that was first reported in the U.K. The first case in the U.S. was reported in Colorado, and the second in California. The mutant Covid strain has traders on edge, as tighter travel restrictions could pressure already weak demand. A stronger dollar has also pushed prices lower. Yesterday morning the EIA reported significant draws in crude, gasoline, and propane inventories, while also showing that distillate stocks rose much more than industry expectations. The mostly bullish report hasn’t translated to higher futures values however. A Reuters poll of economists and analysts has forecast that WTI will average $47.45 per barrel in 2021. The poll also predicts that Brent crude will average $50.67 per barrel next year. Both estimates are about $1 per barrel higher than the estimate from November. Before the opening bell and the start of the last trading session of 2020, the DJIA was up 6.56% YTD, the S&P 500 was up 15.52% YTD, and the Nasdaq Composite was up 43.44% YTD. All three major averages have traded both sides of even this morning. 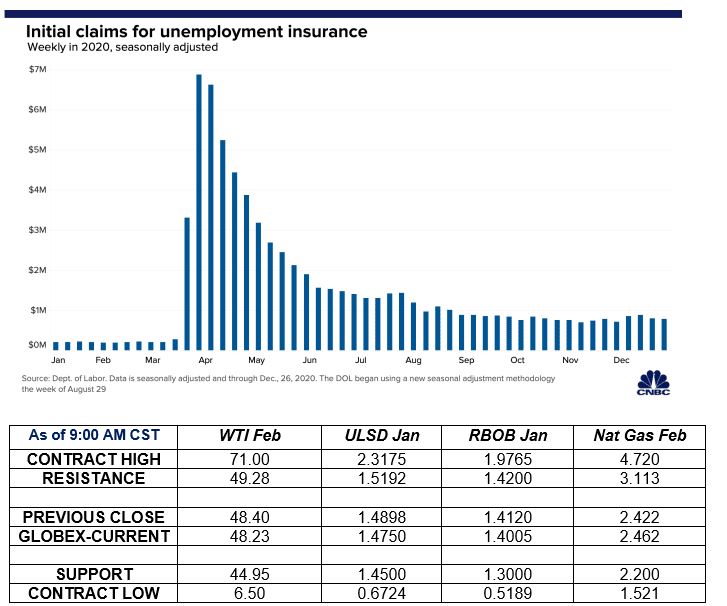