1.4.21 The energy complex has been mixed this morning as crude and products have fallen from intraday highs and pushed into negative territory

Outlook: The energy complex has been mixed this morning as crude and products have fallen from intraday highs and pushed into negative territory. The complex is weighing an OPEC+ meeting of the Joint Ministerial Monitoring Committee today. The committee is holding a meeting to determine if OPEC+ should raise production in February. According to a Reuters report, three OPEC+ sources have stated that most members of the broader group oppose plans to increase output in February, citing rising Covid cases and weak demand. OPEC+ increased production by 500,000 bpd starting January 1, 2021, but are still cutting 7.2 million bpd. Yesterday OPEC Secretary General Mohammad Barkindo warned of the downside risks the group is facing. He stated that the outlook for the first half of 2021 is “very mixed and there are still many downside risks to juggle.” Barkindo also cited concerns about the mutant strain of the virus that has been documented in at least 30 countries. The new strain is anywhere from 10% - 60% more contagious, and could become the dominant form of the virus in time, according to a New York Times report. Outside of the pandemic and OPEC+ headlines, the complex will look ahead to the Senate runoff elections in Georgia scheduled for tomorrow. The runoff elections will have vast implications and will shape the agenda the Biden administration will likely pursue. A divided government will make an aggressive agenda difficult as broad sweeping legislation will be unlikely to pass through both chambers of Congress. According to FiveThirtyEight, both Democratic challengers are ahead in the polls as of this morning. Jon Ossoff leads Republican Senator David Purdue by 1.4%, while Raphael Warnock leads Republican Senator Kelly Loeffler by 2.0%. Equity markets have experienced the same mixed trading that energy markets have seen, as all three major averages have now pushed deeper into negative territory. 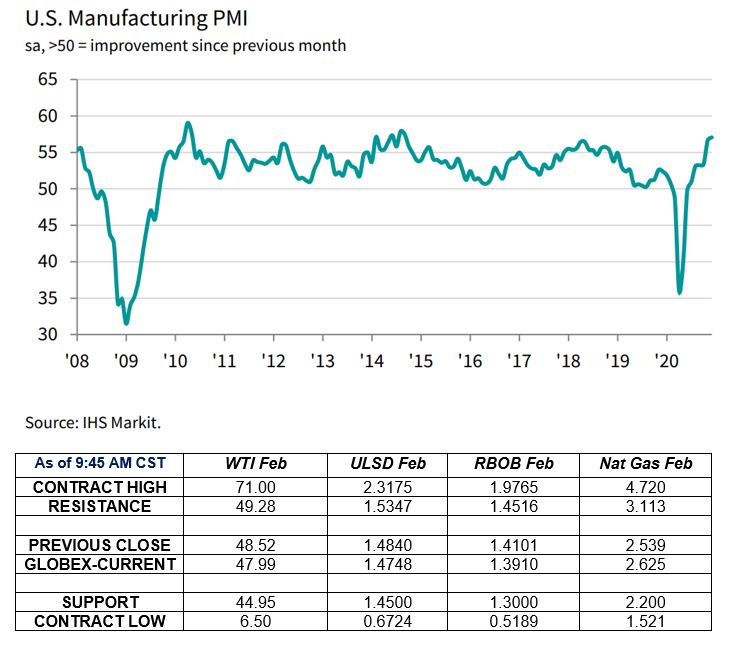