1.5.21 The energy complex has erased losses from yesterday as traders await a decision from OPEC+

Outlook: The energy complex has erased losses from yesterday as traders await a decision from OPEC+. The cartel delayed making a decision on February production yesterday, as the group could not come to a consensus. There hasn’t been an official report as of yet, but the market is expecting that OPEC+ will roll over production in February and not increase output. OPEC sources stated that Russia and Kazakhstan were pushing for another 500,000 bpd increase, while Iraq, Nigeria, and the UAE suggested holding output steady. Cutting production 500,000 bpd in February was also discussed, according to Reuters. Coronavirus related lockdowns are being reinstituted in parts of the world due to a surge in cases caused by a new strain of the virus, particularly in the U.K. and South Africa. Demand will be a constantly moving target due to lockdown measures. OPEC+ will continue to hold monthly meetings in order to discuss market conditions as well as the appropriate steps to take. Moving over to the political spectrum, all eyes will be on the Senate runoff elections being held in Georgia today. Polling data provided by FiveThirtyEight shows both Democratic challengers with small leads. Jon Ossoff holds a 1.8% lead over Republican Senator David Purdue, while Raphael Warnock leads by 2.1% over Republican Senator Kelly Loeffler. It is likely a winner will not be determined in each race for at least a few days following the election. Equities have been slightly mixed this morning as the DJIA and the S&P 500 have traded both sides of even, while the Nasdaq Composite is trading in positive territory.

Crude oil has broken above $50 for the first time since February. The February 2021 contract has traded both sides of $50 this morning, touching as high as $50.05. 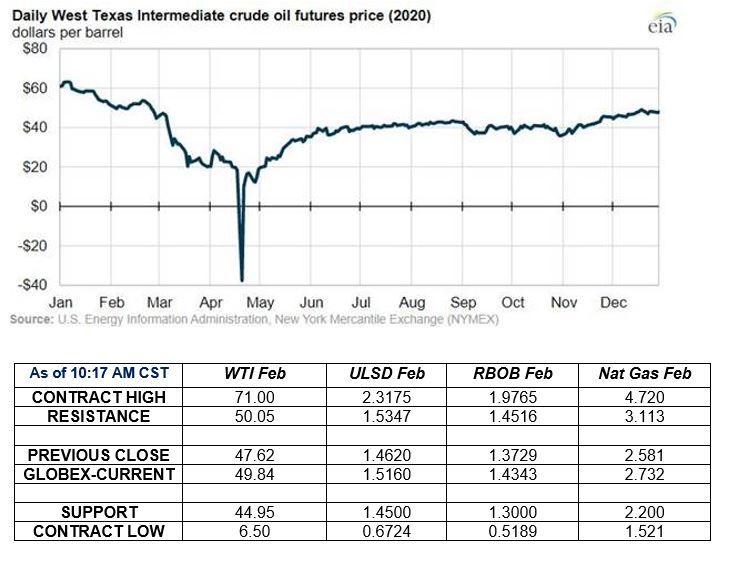