1.11.21 The energy complex has taken a step back this morning as renewed demand concerns have pressured markets lower

Outlook: The energy complex has taken a step back this morning as renewed demand concerns have pressured markets lower. The U.K. is currently in a strict national lockdown, but cases continue to rise. Cases in China have also jumped to their highest levels in more than five months, according to a Reuters report. Shijiazhuang, which is the epicenter of the new outbreak in China, is in complete lockdown. People are unable to leave their homes which has pushed vehicle traffic to near 0. Demand concerns will continue to plague the recovery as countries and states move in and out of lockdown to try and control the spread of the virus and its variants. Mutated versions of the Covid-19 virus have popped up around the world in recent weeks. Despite the ability of the virus to mutate, current vaccines are reportedly still effective against them. The CEO of BioNTech, Dr. Ugur Sahin, told CNBC that even if their vaccine were to not be effective against mutated versions of the virus, they have the ability to change the sequence of the vaccine within a few days, and could deliver a new vaccine within about six weeks. Johnson & Johnson is expected to deliver late-stage trial results for its one-dose Covid vaccine by the end of the month. If the data is supportive, the company aims to deliver at least 1 billion doses by the end of 2021. The Johnson & Johnson vaccine uses the same approach and technology that was used to create the University of Oxford/AstraZeneca vaccine that was recently given emergency use authorization by the U.K.’s regulatory body. A stronger dollar is also pushing energy prices lower. Weakness in equities could be weighing on the energy complex as well, as all three major averages are trading well below even.

Goldman Sachs has revised demand forecasts for January and February, reducing each by 1-2 million bpd. Despite the demand reduction, Goldman Sachs sees a supply deficit beginning in February and lasting throughout 2021. The deficit will peak in September at 2.3 million bpd. 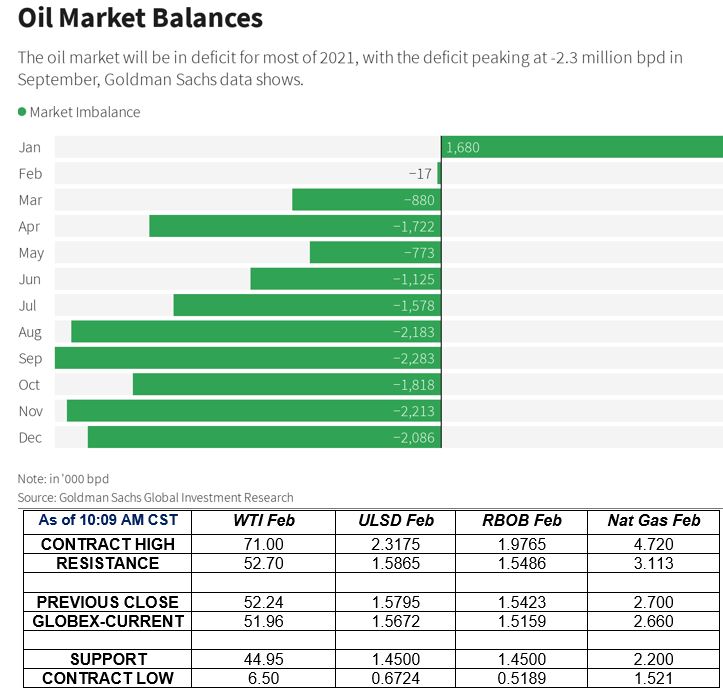