1.12.21 The energy complex has shaken off yesterday’s weakness as crude has pushed to an 11-month high this morning

Outlook: The energy complex has shaken off yesterday’s weakness as crude has pushed to an 11-month high this morning. Bringing support to the market this morning comes from expectations that U.S. crude oil stocks fell again last week. Traders will look ahead to official government data from the EIA that will be released tomorrow morning for confirmation. The lack of fresh headlines likely means that the EIA report will be the catalyst that drives trade for the remainder of the week. The prospect of increased stimulus measures is also bringing support to the market. The Biden administration is likely to pursue a much more aggressive stimulus agenda than originally thought due to both Democratic challengers winning Senate runoff races in Georgia, giving Democrats the thinnest of majorities. Reflationary trade has been discussed in recent weeks, and it appears likely to occur. The simple explanation is that with increased dollars in circulation – due in part to aggressive stimulus measures that have the potential to occur – those increased dollars are purchasing the same or perhaps fewer commodities. More dollars in circulation will likely lead to higher inflation and a weaker dollar. Dollar denominated commodities, such as crude oil, will benefit from that weakness and continue to push higher. Equities have been somewhat mixed this morning, but all three major averages are currently trading above even.

Traffic in London, Rome, and Berlin fell significantly in December and into early January. Strict lockdown measures have pressured demand lower. According to U.K. government data, average sales per filling station are down around 20%. 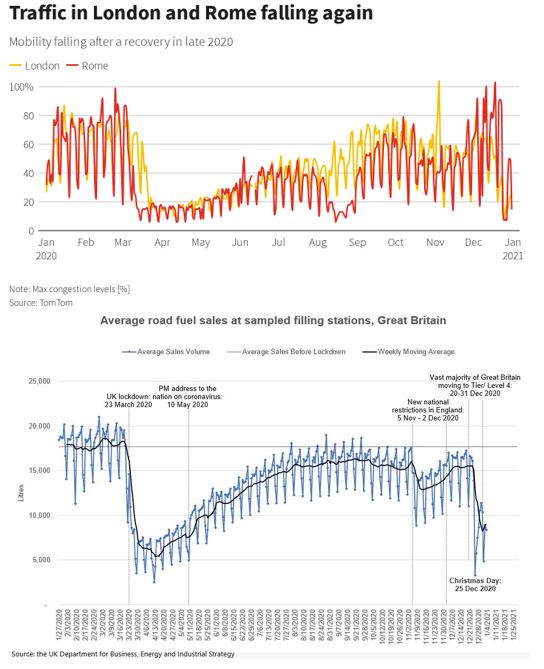