1.13.21 Energy markets have been slightly mixed this morning as mounting Covid-19 cases have put pressure on the complex

Outlook: Energy markets have been slightly mixed this morning as mounting Covid-19 cases have put pressure on the complex. New variants of the virus that have popped up in the U.K., South Africa, and Brazil are reportedly much more infectious than the normal strain. According to data from Johns Hopkins University, on a seven day average, the U.S. is reporting at least 247,600 new Covid-19 cases and at least 3,340 virus related deaths each day. Global cases have reached nearly 92 million, and expectations are that we’ll reach 100 million before the end of January. Yesterday afternoon an industry group reported that U.S. crude oil stocks fell more than expected last week. They showed that crude inventories fell 5.8 million barrels in the week ending January 8. The Reuters poll of analysts and traders is estimating that the EIA will report a 2.3 million barrel draw in the Weekly Petroleum Status Report. The U.S. Department of Labor stated this morning that its consumer price index increased 0.4% in December, and 0.2% in November. A nearly 8.5% increase in the cost of gasoline accounted for well over half of the rise in the CPI. Overall, the CPI rose 1.4% in 2020, which was the smallest increase since 2015. A stronger dollar and weakness in equities are also causing some of the softness we’re experiencing in energy markets to start the day. All three major equity averages are trading slightly below even. 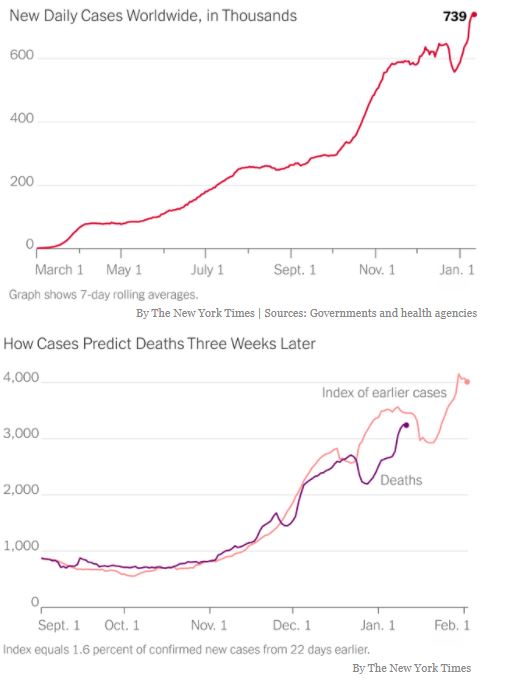