1.14.21 The energy complex has been slightly mixed this morning as crude has traded both sides of even, but has recently pushed further into negative territory

Outlook: The energy complex has been slightly mixed this morning as crude has traded both sides of even, but has recently pushed further into negative territory. Pressuring the market lower this morning comes from mounting Covid-19 cases and more stringent lockdowns in Europe and China. Demand concerns continue to plague market sentiment. China reported its first death from Covid since May as World Health Organization officials have arrived in the country. The WHO investigators arrived in Wuhan and will study the origins of the virus alongside Chinese scientists. Also putting pressure on the complex this morning comes from poor jobs data as reported by the U.S. Department of Labor. They showed that first-time claims rose the most since August. Preventing steeper losses is supportive EIA data released yesterday that showed that U.S. crude stocks fell 3.246 million barrels last week, which was mostly inline with industry expectations. Providing an additional layer of support is the news that Johnson & Johnson’s one dose coronavirus vaccine is safe and appears to generate the immune response necessary to be a viable vaccine. Johnson & Johnson will release results from its 45,000 person phase three trial later this month. If all things go according to plan, J&J will aim to provide at least 1 billion doses of the vaccine by the end of 2021. Johnson & Johnson is using the same technologies it used to develop its Ebola vaccine, according to a CNBC report. Equities are stronger to start the day as investors have their eyes on an announcement from the Biden administration. President-elect Joe Biden is reportedly planning another stimulus package that would exceed $1 trillion, and could be as high as $2 trillion. The soon to be announced stimulus bill is likely to contain language that would increase direct payments by $1,400. 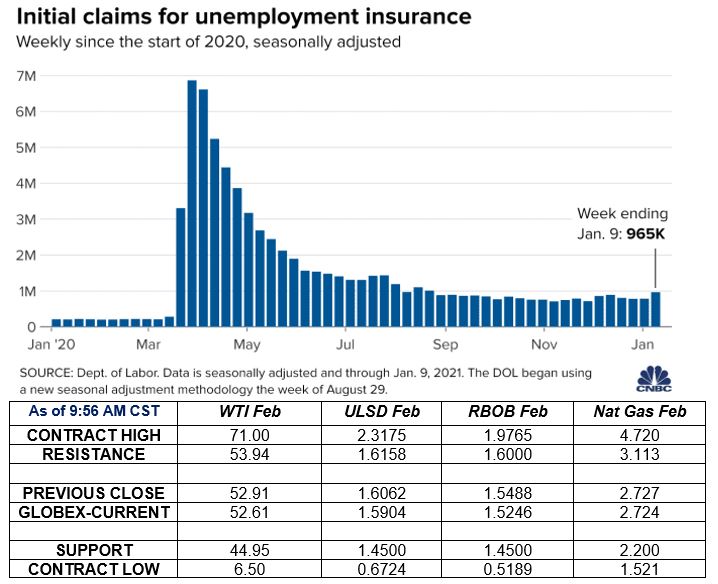