1.15.21 The energy complex has pushed into negative territory this morning as weak jobs data reported by the U.S. Department of Labor, along with mounting Covid concerns have pressured the market lower

Outlook: The energy complex has pushed into negative territory this morning as weak jobs data reported by the U.S. Department of Labor, along with mounting Covid concerns have pressured the market lower. Brent and WTI are poised for their first weekly decline in three weeks. A resurgence in Covid-19 cases around the world, along with mutations of the virus that are reportedly much more contagious, combined with a delayed vaccine rollout have made the demand outlook a bit more worrisome. All of that combined with refreshed and stricter lockdown measures in parts of Europe and China will continue to weigh on the complex. Preventing steeper losses comes in the form of an announcement yesterday evening from the Biden administration. As I’ve previously mentioned, now that both Democratic challengers won their respective Senate runoff races in Georgia, it is likely that President-elect Joe Biden and his administration will pursue a much more aggressive stimulus agenda. Yesterday evening he outlined a $1.9 trillion stimulus package proposal. The aid package includes $415 billion to help the rollout of vaccines, around $1 trillion in direct relief to households, and another $440 billion for small businesses and state and local governments. Despite the larger than anticipated proposal, equities have fallen off to start the morning. All three major averages are trading below even, and all three are poised for a weekly loss.

Output from OPEC+ was at a seven month high in December, dropping compliance from the broader group down to 98.5%. OPEC produced 25.43 million bpd, which was an increase of 220,000 bpd. Rising Libyan production, who are exempt from production quotas, led to the push higher in OPEC output. 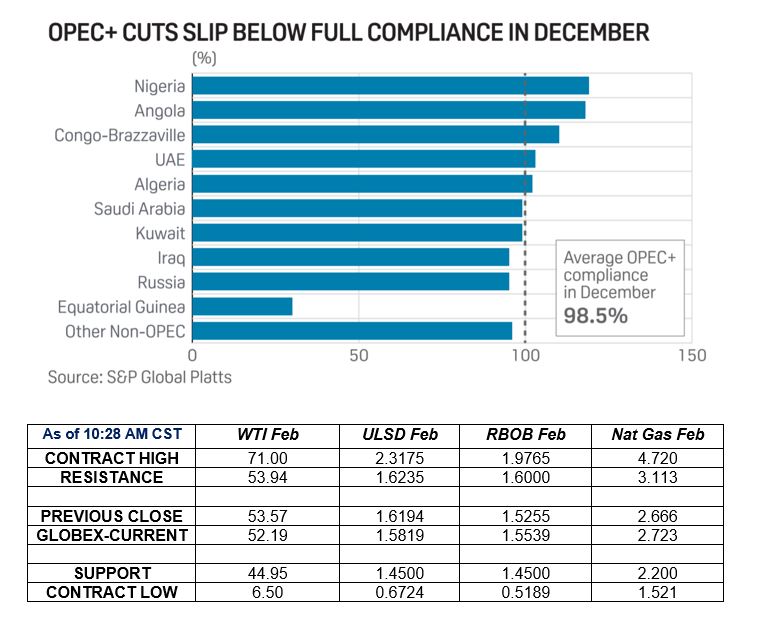