1.19.21 Energy futures values have pushed higher this morning as a weakening dollar and stimulus optimism have helped buoy prices

Outlook: Energy futures values have pushed higher this morning as a weakening dollar and stimulus optimism have helped buoy prices. Chinese economic data released on Monday is also providing some support to the complex. China’s economy expanded by 6.5% in Q4 of 2020 when compared to the same time period the year prior. Q3 growth was reportedly at 4.9%. Total GDP for China rose 2.3% in 2020, making it the only major economy to avoid a contraction last year. According to a Reuters poll, China’s GDP is set to expand at the fastest pace in a decade at 8.4% in 2021. Despite the uptick in Chinese economic activity, and the continued push higher in energy futures values, the International Energy Agency has forecast that oil demand will take another hit from a resurgence in Covid cases. The IEA stated in its monthly report that the current curtailments that have been put in place, such as border closures and lockdown measures, will likely continue to put pressure on fuel demand until vaccines are more widely distributed. The IEA has lowered its demand forecast for the first quarter of this year by 580,000 bpd. They have also reduced the total demand outlook for 2021 by 300,000 bpd. Equities are seeing a big jump this morning as earnings season is underway. Goldman Sachs Q4 earnings beat estimates and have helped push equities higher this morning as all three major averages are trading well above even.

The IEA has forecast that demand will fall nearly 600,000 bpd in Q1 of 2021, and 300,000 bpd overall this year. They have also forecast that supply and demand will reach equilibrium in Q2 of 2021, before demand takes off and outpaces supply in the latter half of the year. 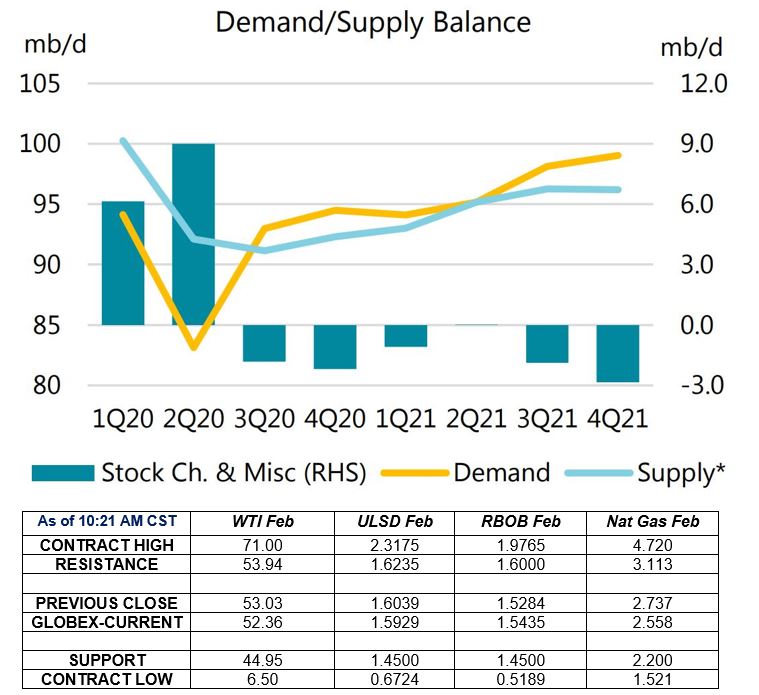