1.20.21 The energy complex has pushed higher as President-elect Joe Biden is set to be sworn into office later this morning

Outlook: The energy complex has pushed higher as President-elect Joe Biden is set to be sworn into office later this morning. The inauguration will be mostly virtual due to the pandemic but will still feature several ceremonial events and celebrations. The change in administration is helping give a boost to investor sentiment in both energy and equity markets. Additional stimulus measures are likely to be pursued and delivered upon as Democrats hold the thinnest of majorities in the House and Senate. Bipartisan support for larger stimulus checks does exist however. Yesterday U.S. Treasury Secretary nominee Janet Yellen pressed members of Congress to “act big” on pandemic relief. The Biden administration has already set forth a $1.9 trillion stimulus package. The “American Rescue Plan” calls for sending an additional $1,400 per person to eligible recipients, enhanced unemployment aid, more assistance for small businesses, and a litany of other proposals. Comments made by Yellen, along with the prospects for further stimulus have pressured the dollar lower and provided an additional boost to the energy complex. More dollars in circulation would likely weaken the value of the dollar and cause dollar denominated commodities to increase in value. Equities are ripping higher this morning. All three major averages are well above even, with the S&P 500 and Nasdaq Composite hitting intraday all-time highs.

Saudi Arabia beat Russia to remain China’s top crude supplier in 2020, according to Chinese customs data. Crude oil demand in China remained quite robust despite the pandemic. Chinese imports rose 7.3% to a record of 10.85 million bpd on average in 2020. Saudi shipments to China rose 1.9% as well, averaging 1.69 million bpd. Russia was a close second, averaging 1.67 million bpd, up 7.6% from 2019. 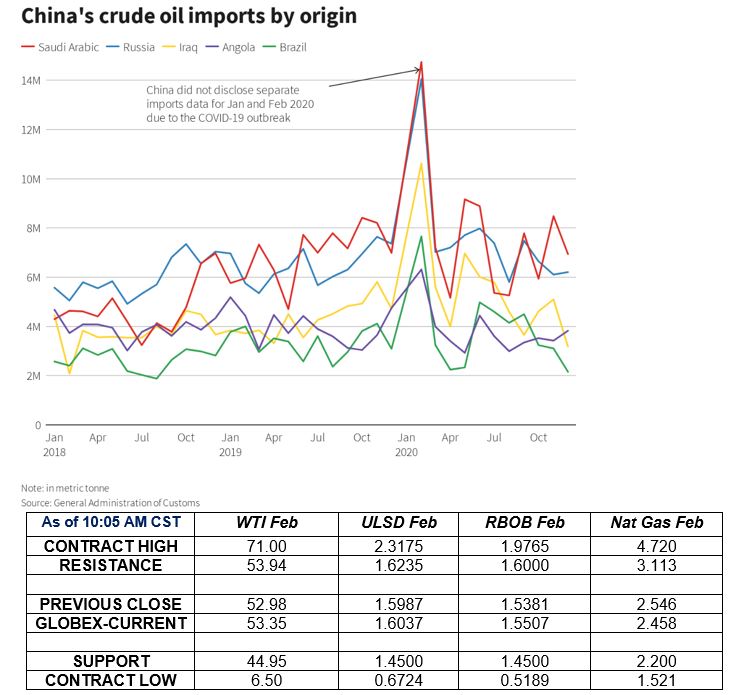