1.21.2021 The energy complex has been slightly mixed this morning as rising crude and product inventories weigh on the market

Outlook: The energy complex has been slightly mixed this morning as rising crude and product inventories weigh on the market. Yesterday afternoon an industry group reported that U.S. crude stocks rose 2.6 million barrels in the week ending January 15. They also showed that distillate inventories rose 816,000 barrels, while gasoline stocks rose 1.1 million barrels. The Weekly Petroleum Status Report from the EIA will be released on Friday morning due to the MLK Holiday on Monday and Inauguration day yesterday. Yesterday President Joe Biden was sworn into office. Biden signed 17 executive orders shortly after taking office. Rejoining the Paris Climate Accord, as well as several EO’s related to the pandemic were signed. Three Democratic Senators were also sworn into office yesterday, giving Democrats a majority. Chuck Schumer has since been appointed to Senate Majority Leader. It is expected that an aggressive stimulus agenda will almost immediately begin to be pursued. The Biden administration has proposed a $1.9 trillion stimulus package. That proposal has boosted investor sentiment in the energy and equity sectors to some degree. Despite weak jobs data from the U.S. Department of Labor this morning, equities continue to push higher as all three major averages are slightly above even on the day. Earlier in the session the DJIA hit an intra-day all-time high. 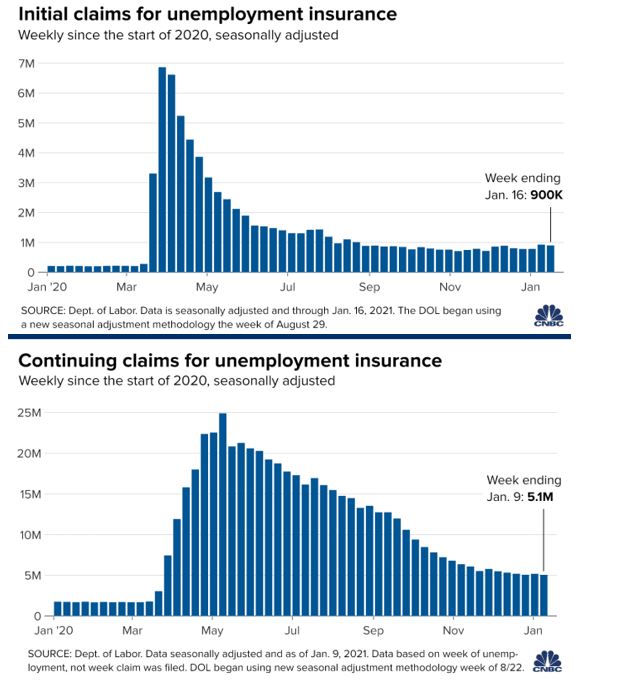