1.25.21 The energy complex has been slightly mixed this morning as crude and products have traded both sides of even

Outlook: The energy complex has been slightly mixed this morning as crude and products have traded both sides of even. RBOB and ULSD have more recently pushed further into positive territory while nearby crude hovers around even on the day. Putting some pressure on the complex this morning comes from renewed lockdowns in Hong Kong due to increased Covid-19 cases. Lockdowns in Europe have also pressured investor sentiment, as the demand outlook remains to be weak for Q1 of 2021. Stimulus negotiations here in the U.S. are set to ramp up this week, as lawmakers from both parties have expressed some concerns about the $1.9 trillion stimulus package that the Biden administration has proposed. Calls for a more limited bill that focuses mainly on increased stimulus checks and funding for vaccine distribution are also coming from both sides of the aisle. The Biden administration has promised an aggressive stimulus agenda to combat the economic effects of the pandemic. Negotiations will be watched closely going forward as the pandemic continues to rage on here in the U.S. and globally. The U.S. is recording at least 170,000 new Covid-19 cases and around 3,000 virus related deaths each day. Moderna is said to be working on a Covid booster shot for the South African variant. Moderna has stated that its current vaccine appears to work against both the South African and U.K. strains. Equities are also having a rocky start to the trading session, as all three major averages have fallen well below even.

The largest oil companies in the world dramatically lowered spending in 2020 due to the pandemic. Acquisitions of new exploration licenses for the five companies below dropped to the lowest level in at least five years, according to data from Reuters. 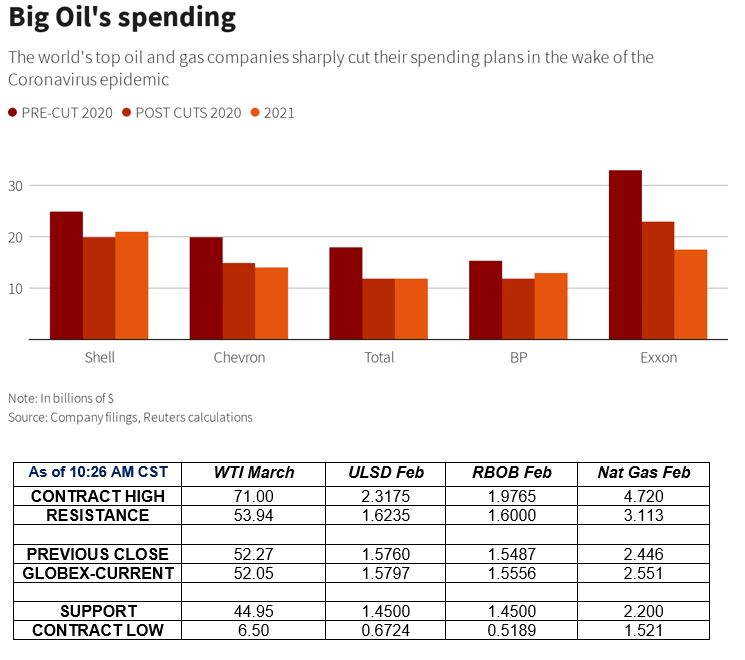