1.26.21 The energy complex has been slightly mixed this morning as nearby crude has traded both sides of even, while product markets hold onto moderate gains

Outlook: The energy complex has been slightly mixed this morning as nearby crude has traded both sides of even, while product markets hold onto moderate gains. The International Monetary Fund has increased its global economic growth outlook for 2021 to 5.5%. The most recent forecast from the IMF shows an increase of 0.3% from the October prediction. The IMF cited the effects of the various vaccines as the growth driver, but “exceptional uncertainty” still remains. The IMF also mentioned that policy measures in the U.S., Japan, and other large economies would help drive growth. Democrats in the House and Senate are planning to bring forth the $1.9 trillion stimulus proposal that the Biden administration announced a couple of weeks ago. The proposal has met some criticism from both sides of the aisle, in what could perhaps be another lengthy and drawn out battle to get the next stimulus bill passed. A standalone bill that calls for increased stimulus checks to those that qualify, and funding for the distribution and administration of vaccines is likely to gain enough bipartisan support to move quickly through both chambers of Congress however. January 28 marks the start of the Lunar New Year. The holiday lasts for 40 days and typically causes the largest movement of people on the planet. Millions of people in China travel to see their extended families during this time. Due to the pandemic and increased lockdown measures, travel during this years Lunar New Year is expected to be about 40% below 2019 levels. Equities are having a bit of a mixed start to the day as all three major averages have traded both sides of even.

India is the third largest importer of crude oil in the world. In December 2020, crude oil imports averaged about 4.8 million bpd, the highest level seen since October 2018. Refiners in India operated at an average rate of 99.1% in December. High imports and high processing rates would suggest that fuel demand in the country is set to leap higher. 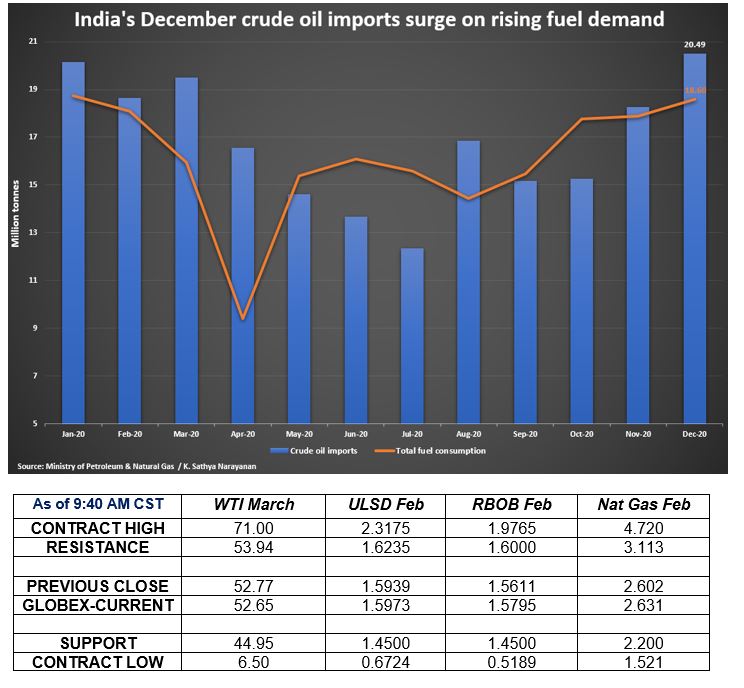