1.27.21 Energy markets have opened slightly weaker this morning as demand concerns due to lockdowns in China and parts of Europe have put pressure on the complex

Outlook: Energy markets have opened slightly weaker this morning as demand concerns due to lockdowns in China and parts of Europe have put pressure on the complex. A tightening supply scenario is limiting steeper losses however. Yesterday afternoon an industry group reported that U.S. crude inventories fell 5.3 million barrels in the week ending January 22. This morning traders will look towards government stats provided by the EIA in the Weekly Petroleum Status Report for confirmation of the data. The Reuters poll of analysts and traders is estimating that the EIA will report a 43,000 barrel build in U.S. crude oil stocks. A U.S. appeals court upheld a lower court’s decision to throw out a key federal permit for the Dakota Access crude oil pipeline. The removal of the permit raises the chances that the 557,000 bpd pipeline will be shutdown pending an environmental review. The line carries crude from North Dakota’s Bakken field, which is the second-largest shale play in the country. The Dakota Access Pipeline will remain open for now, as the same appeals court disagreed with the lower court’s decision in regards to shutting down operations. Equities are off to a rocky start, as all three major averages are trading well below even. Weak earnings from Boeing and AMD have pressured equities lower this morning.

Tesla is scheduled to report fourth-quarter earnings today. Attention will be focused on the delivery outlook for 2021. Industry expectations are calling for total vehicles delivered to be around 800,000 in 2021, and over 1 million in 2022. Analysts are expecting the company’s quarterly revenue to exceed $10 billion for the first time, according to Bloomberg. 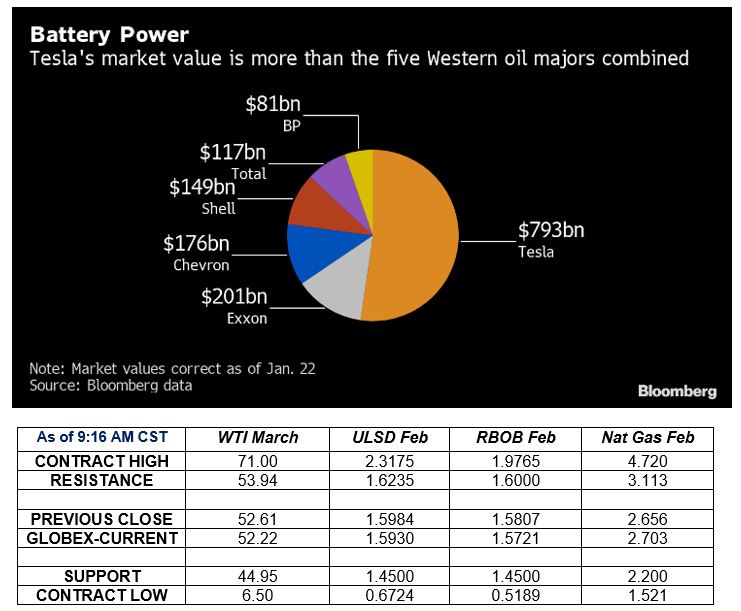