1.29.21 The energy complex has moved higher this morning, as crude and products are all trading well above even

Outlook: The energy complex has moved higher this morning, as crude and products are all trading well above even. Despite being up around 30 cents on the day, nearby crude is currently the weakest leg of the complex. March RBOB is up about 2.5 cents, while March ULSD has jumped about 1.5 cents higher. Providing some support to the market this morning is the anticipation that Saudi Arabia will begin reducing crude oil output by 1 million bpd starting on February 1. The Saudi’s have pledged to cut 1 million bpd in both February and March, as demand concerns are expected to persist throughout Q1 and Q2 of this year, before improving in the latter half of the year. Preventing further gains this morning is weakness in equities. That weakness is stemming from a report from Johnson & Johnson in regards to its Covid-19 vaccine. Johnson & Johnson has said that its single-dose coronavirus vaccine was just 66% effective in protecting against the virus. The vaccine is reportedly less effective against the various mutated versions that have popped up in South Africa, the U.K., and Brazil. Despite not being as effective as some of the others, the FDA has indicated that it would authorize a vaccine that is proven to be safe and at least 50% effective. All three major equity averages have started the day in the red, with the S&P 500 down about 20 points, and the DJIA currently down about 200points.

U.S. propane inventories are beginning to approach the bottom end of the five-year average. Draws in stocks in the winter months are typical, as can be seen in the chart below. Inventory levels at PADD’s 2 & 3 (Midwest & Gulf Coast) are also nearing the low end of what’s considered normal. As we continue to move through the winter and into early spring, inventories are likely to continue drawing down and will continue to support prices. 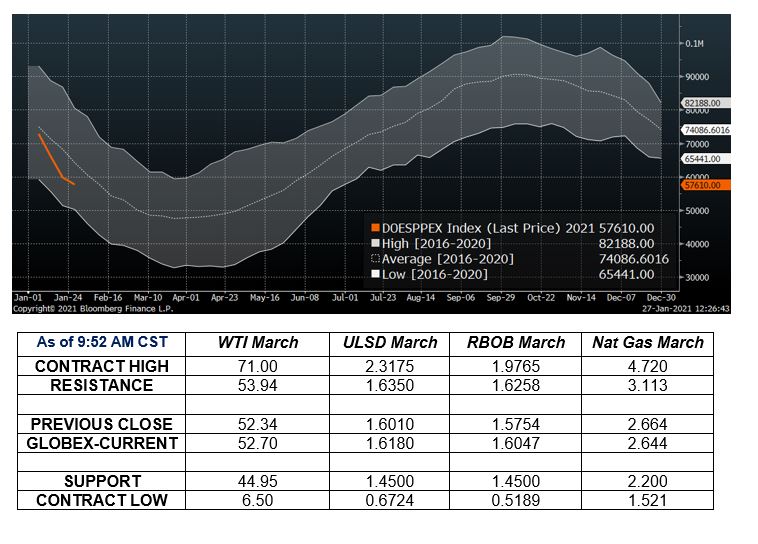