2.1.21 The energy complex has moved slightly higher this morning as demand concerns are being outweighed by the prospects for a quicker global economic recovery

Outlook: The energy complex has moved slightly higher this morning as demand concerns are being outweighed by the prospects for a quicker global economic recovery. Vaccine headlines have been relatively supportive as well, despite the results from Johnson & Johnson’s Covid-19 clinical trial being just 66% effective against preventing the virus. I think what is being missed from this headline is that the Johnson & Johnson single dose vaccine may only be 66% effective at prevention, but it did however prevent all hospitalizations, which is significant. If the vaccine may not prevent you from getting sick, but does make it significantly more mild of a case, that should be viewed as a positive development. Johnson & Johnson is likely to push for an emergency use authorization from the FDA towards the end of February. The FDA has signaled a willingness to grant an authorization for any vaccine that proves to be safe and over 50% effective. President Biden is scheduled to meet with 10 Republican Senators today as the GOP lawmakers have announced a $618 billion relief bill. The scaled down bill lowers the direct payments to $1,000, and also lowers the income threshold. The bill would also reduce unemployment benefits and funding to state and local governments. Despite the meeting that will take place, Senate Majority Leader Chuck Schumer has labeled the GOP bill has “inadequate” and has signaled that Democrats may move forward without the help of Republican colleagues. Stimulus negotiations are likely to be a catalyst for trade in the days ahead. Equities have started the week in positive territory, as all three major averages are trading well above even this morning.

February 1 marks the start of Saudi Arabia’s voluntary 1.0 million bpd output cut. Russia and Kazakhstan will be allowed to increase production by 75,000 bpd in both February and March as well. Demand concerns will continue to drive market sentiment, but those concerns should be balanced by the willingness from Saudi Arabia to cut production. 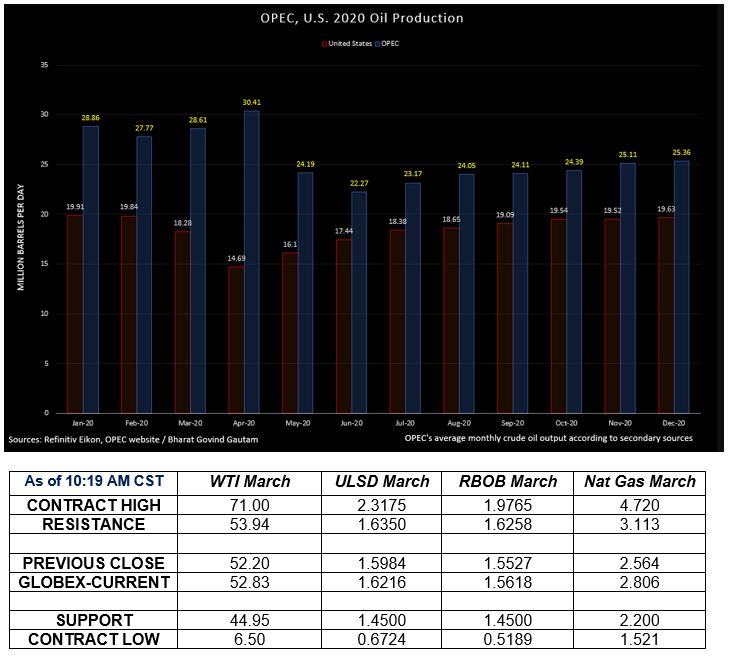