2.3.1 The energy complex has continued to push higher this morning, as crude and products are all trading well above even

Outlook: The energy complex has continued to push higher this morning, as crude and products are all trading well above even. Providing support to the complex comes from the increased likelihood that the $1.9 trillion stimulus proposal from President Biden will be be passed. The more bullish outlook comes as the Senate voted 50-49 along a party line vote to advance the bill as a budget resolution, which sets the reconciliation process into motion. The House of Representatives voted in a similar fashion. If both chambers pass it through reconciliation, the bill can be passed without any Republican support. President Biden and Senate Majority Leader Chuck Schumer have both stated that they want to seek common ground and engage in more collaborative discussions, but Senator Schumer has stated that the $618 billion GOP proposal falls too short and time is of the essence. If the larger stimulus bill were to pass, it would provide $1400 direct payments to those that qualify, increased unemployment benefits, and $350 billion for state and local governments. Better than anticipated private payroll data from ADP is also providing the market some support this morning. ADP reported that private companies added 174,000 new jobs in January. A survey of economists from Dow Jones anticipated an increase of 50,000 jobs. Equities have been slightly mixed this morning with the DJIA trading both sides of even while the S&P 500 and the Nasdaq Composite are higher on the day. 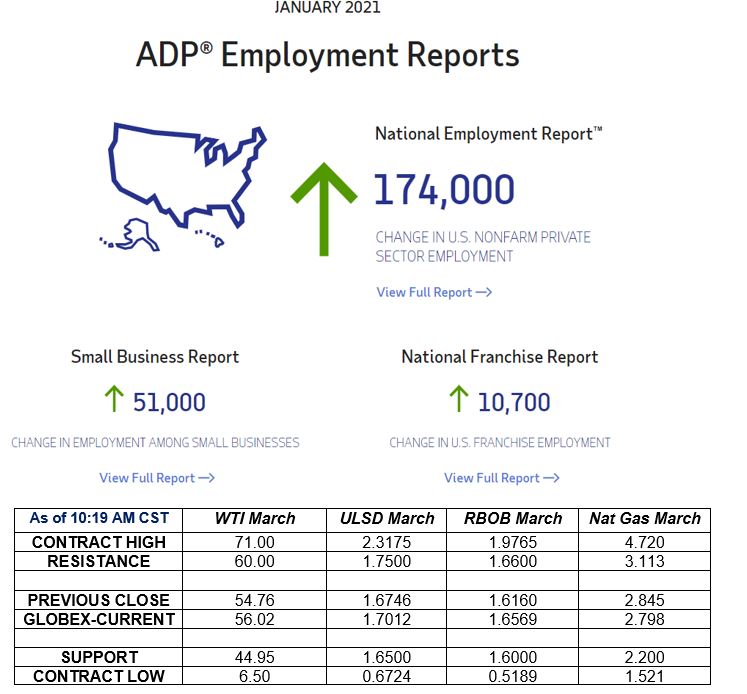