2.8.21 The energy complex continues to push higher this morning, as Brent crude has surpassed $60 per barrel for the first time in over a year

Outlook: The energy complex continues to push higher this morning, as Brent crude has surpassed $60 per barrel for the first time in over a year. A tightening global supply scenario, positive vaccine headlines, and a robust stimulus agenda from the Biden administration have all continued to bring support to the complex. The prospects for Iranian crude oil exports to rapidly return to the market have been dampened as well, as President Biden has said that the U.S. would not lift sanctions in order for Iran to come to the negotiating table. Iran’s Supreme Leader Ayatollah Ali Khamenei has stated that sanctions should be lifted before negotiations could begin. A weak jobs report from the U.S. Department of Labor last week has also boosted investor sentiment that the $1.9 trillion stimulus bill will be passed quickly. Last week the House and Senate passed a budget resolution which started the reconciliation process that would allow the stimulus bill to pass with a simple majority. What was passed by both chambers of Congress on Friday was essentially just a shell bill. What is exactly inside that bill will be what is worked on and discussed over the coming days. The package currently includes $1,400 direct payments to those that qualify, enhanced unemployment, and funding for vaccines and their distribution. Equities have also started the day moving higher, as the all three major averages have hit intraday all-time highs.

OPEC+ compliance will continue to be something to monitor going forward, but since the historic supply pact was achieved in the spring, compliance has been quite good overall. With monthly OPEC meetings of the Joint Ministerial Monitoring Committee and the Joint Technical Committee, the focus within the group will be for members to continue to hit their supply quota in order to balance the market and boost prices. 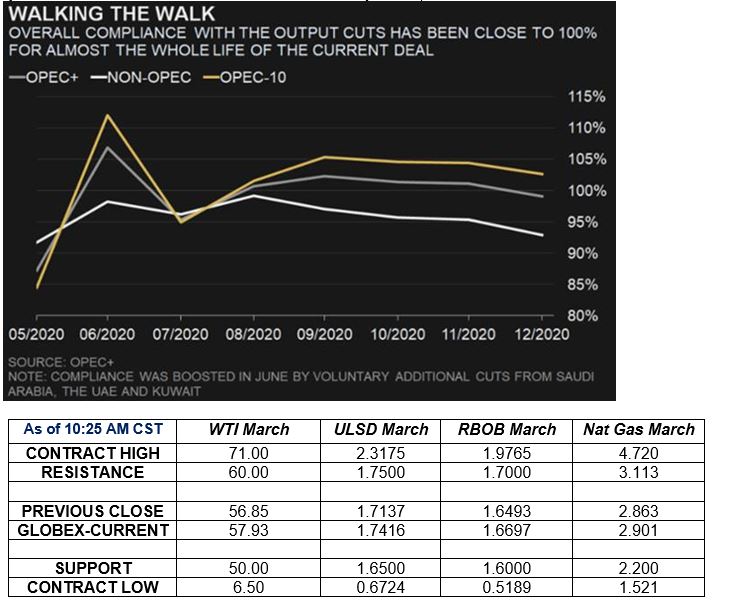