2.12.21 The energy complex has reversed course this morning and has shaken off earlier weakness as crude and products have pushed into positive territory

Outlook: The energy complex has reversed course this morning and has shaken off earlier weakness as crude and products have pushed into positive territory. Providing some support to the market this morning comes from positive headlines surrounding the pandemic. The number of new Covid-19 cases in the U.S. is declining to levels last seen around Thanksgiving. The U.S. is recording about 102,000 new cases each day, based on the seven-day average, according to data from Johns Hopkins University. President Biden announced yesterday that the administration had finalized a deal to secure another 200 million vaccine doses, bringing the U.S total up to 600 million doses. Giving the complex some pause however comes from somewhat bearish reports from both the IEA and OPEC. The IEA released its latest forecast yesterday, stating that global supply will continue to outpace demand for much of the year. OPEC has stated global oil demand will recover more slowly than originally thought, reducing its forecast for global demand by 110,000 bpd in 2021. To give some credence to the less than ideal demand outlook, the number of people who traveled in China ahead of the Lunar New Year Holiday fell by 70% when compared to 2019 levels, according to Reuters. Equities have shaken off most of the losses seen earlier in the session as well. The DJIA remains just below even, while the S&P 500 and the Nasdaq Composite trade in positive territory. All three major averages are poised to settle at near record highs.

As we can see from the chart below, Iranian crude production has dropped significantly since U.S. sanctions were put in place in 2018. The Iranian government rejected a draft budget based on output of 2.3 million bpd last week. The Iranian fiscal year begins in March, and the proposal was rejected as lawmakers in the country have cast doubt on any immediate sanction relief. This should be viewed as a positive development for global crude supplies, as fewer Iranian exports will help global inventories to continue to draw down. 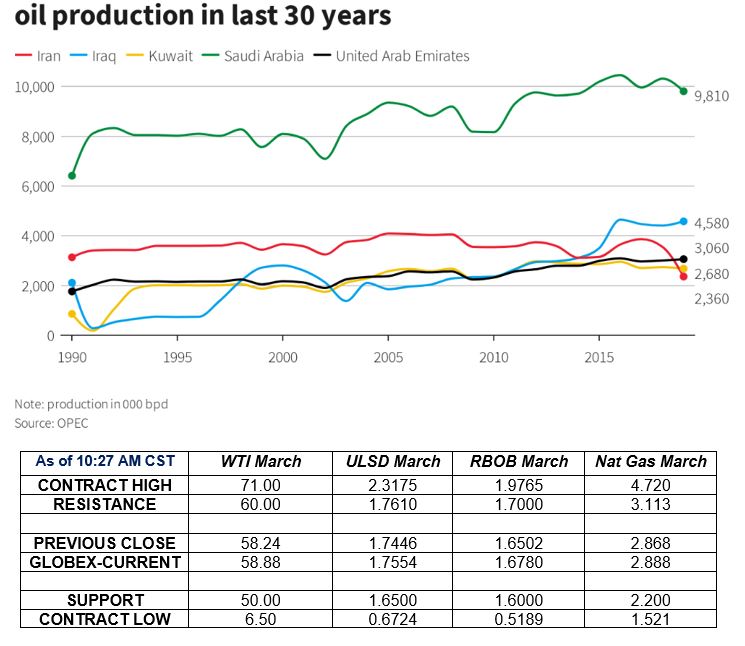 Holiday Schedule: Energy markets will halt at noon CST on Monday, February 15 due to the Presidents Day holiday. CHS Energy Hedging will be staffed until noon.