2.16.21 The energy complex has pressed higher this morning as cold weather across the country has pushed crude above $60 per barrel for the first time since January 2020

Outlook: The energy complex has pressed higher this morning as cold weather across the country has pushed crude above $60 per barrel for the first time since January 2020. Strength in crude has tapered off a bit, but product markets remain well above even on the day. The deep freeze has left millions without power, and has shut several oil wells and refineries in southern states. The largest refinery in the U.S., Motiva’s 607,000 bpd Port Arthur, Texas facility, has been shut down due to the rolling blackouts and extreme temperatures. Refineries in Texas that are owned by Valero, Total, Exxon, and Citgo are all experiencing similar shutdowns. Texas produces just over 4.5 million barrels of crude oil per day. Power shortages are anticipated to last through today, but warmer weather is on the horizon. Providing an additional layer of support comes from more positive Covid-19 data. According to data from Johns Hopkins University, the seven-day average of new Covid-19 cases fell 23% when compared to the week prior. The seven-day average is showing about 85,000 new cases each day. Moderna is expecting to deliver 100 million doses of its two-dose vaccine by the end of March, according to an update from the company. Moderna will provide another 100 million doses by the end of May, and the final 100 million by the end of July. Equities started the day higher but have since been a bit mixed, as the DJIA and the Nasdaq Composite have held onto small gains, while the S&P 500 has traded both sides of even. Bitcoin has surpassed $50,000 for the first time ever today.

According to data from PowerOutage.us, over 4.1 million customers in Texas were experiencing power outages as of 2:05am EST this morning. Demand for energy has outstripped supply due to the bitter cold in the region, which has caused prices to skyrocket. 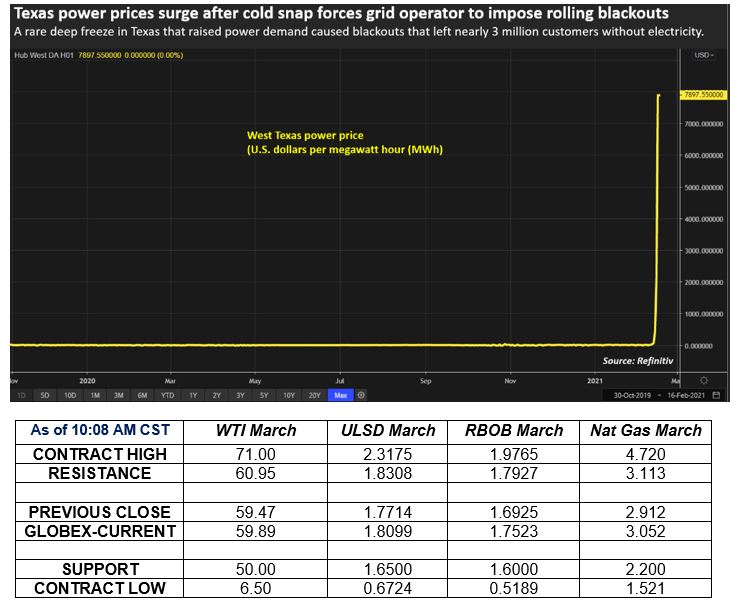