2.19.21 The energy complex has been mixed throughout today’s session, as crude and ULSD trade below even, while nearby RBOB has held onto strong gains

Outlook: The energy complex has been mixed throughout today’s session, as crude and ULSD trade below even, while nearby RBOB has held onto strong gains. Pressuring the complex is the news that energy companies in Texas are preparing to restart oil and gas fields that were shut down due to the frigid weather. Bitter cold temperatures froze natural gas lines and shuttered about 4 million bpd of crude oil production in the state. Preventing steeper losses this morning is bullish data from the EIA that was released yesterday morning in the Weekly Petroleum Status Report. They showed that U.S. crude and product inventories fell a combined 13 million barrels in the week ending February 12. Also lending some support this morning comes from commentary made by Treasury Secretary Janet Yellen. She stated that a large Covid-19 relief package is needed for a full economic recovery. She also added that the $1.9 trillion bill could help the U.S. get back to full employment in a year. Committees in the U.S. House of Representatives continue to meet to hash out the details of the bill. House Speaker Nancy Pelosi has stated that the House aims to pass the legislation by the end of next week. The enhanced unemployment benefit is scheduled to lapse on March 14 if no new bill were to be passed. There is added pressure to move swiftly as the U.S. Department of Labor reported that weekly jobless claims rose to 861,000 last week, well above the 773,000 estimate from Dow Jones. Equities have all started the day higher, as all three major averages are trading well above even. 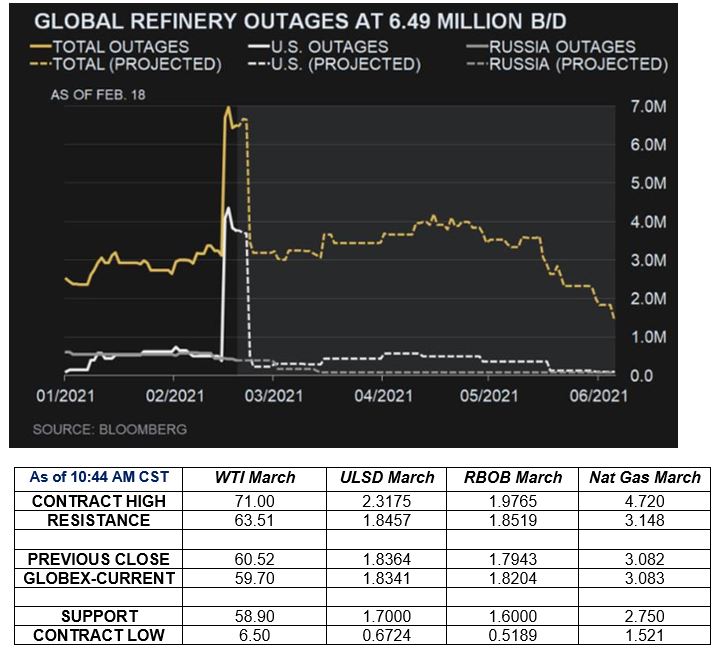