2.22.21 The energy complex has shaken off the weakness experienced late last week and is pushing higher this morning, as crude and products are trading well above even

Outlook: The energy complex has shaken off the weakness experienced late last week and is pushing higher this morning, as crude and products are trading well above even. Giving support to the market is the news that crude production and refinery operations in Texas are likely to take longer to restart than originally anticipated. Cold weather early last week forced the shutdown of about 4 million bpd of crude oil production. The frigid temperatures also caused around 21 billion cubic feet of natural gas production to be forced to shutdown as well. A report from Reuters is stating that shale output in Texas could take up to two weeks to resume normal operations. Also providing a layer of support this morning is an updated forecast from Goldman Sachs. The bank has predicted that Brent crude will reach $70 per barrel in the second quarter of 2021, and $75 per barrel in Q3. Both forecasts are $10 above previous predictions. Goldman Sachs also estimates that global oil demand will reach 100 million bpd by late July 2021. The next OPEC+ meeting is scheduled for March 4. It is expected that the group will increase production by 500,000 bpd in April. Saudi Arabia is likely to unwind its 1.0 million bpd voluntary output cut in April as well. Equities are off to a rocky start this morning, as all three major averages are trading well below even. Rising treasury yields has pressured equities, as the 10-year Treasury yield increased 14 basis points last week to 1.34%, which is the highest it’s reached since February 2020. Federal Reserve Chairman Jerome Powell is scheduled to give his semi-annual testimony on the economy at the Senate Banking Committee on Tuesday.

Both the EIA and OPEC have lowered their respective forecasts for U.S. shale output for 2021. OPEC has suggested a contraction of 140,000 bpd. Both forecasts put production at 7.2 million bpd or lower for the year. This would suggest that despite the bullish outlook for crude prices, the incentive to ramp up production in the U.S. remains relatively weak. 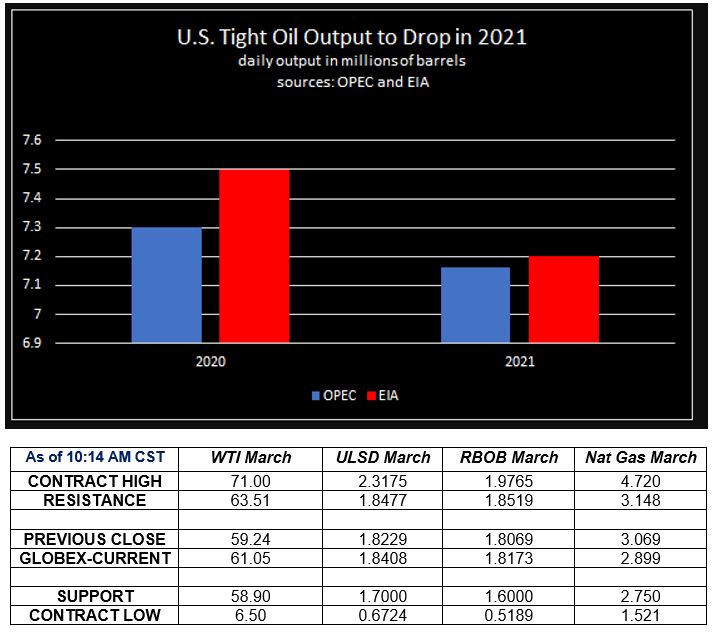