2.23.21 The energy complex has been mixed this morning, with crude and products trading both sides of even

Outlook: The energy complex has been mixed this morning, with crude and products trading both sides of even. Pressuring the complex this morning is stemming from weakness in equities. All three major averages have sold off and are trading well below even. The Nasdaq Composite hit its lowest level since late January earlier in the session. The fundamental picture in energy remains quite bullish despite the selloff in equities today. Yesterday analysts at Goldman Sachs raised their Brent crude oil price forecast by $10 in Q2 and Q3. Goldman Sachs is estimating that Brent will reach $70 per barrel in Q2, and $75 per barrel in Q3. Morgan Stanley has also raised its price estimate. They expect Brent to hit $70 per barrel in Q3, citing falling Covid-19 cases, improved vaccine rollouts, and inventories that are continuing to draw down. In regards to vaccine distribution, manufacturers of the vaccines have said that that they are dramatically increasing production next month, according to CNBC. Pfizer expects to provide over 13 million doses of its two-shot vaccine per week by mid-March, which is more than double what it is currently producing. Moderna is aiming to deliver 40 million doses of its two-dose vaccine per month by April, which is also nearly double what they are currently shipping out. Later this afternoon an industry group will release its weekly inventory report. Tomorrow the EIA will release its Weekly Petroleum Status Report. With the production and refinery issues in Texas and along the Gulf Coast that were caused by the bitter cold last week, it is likely we’ll see large draws once again this week.

With the production and refining issues experienced throughout last week in Texas and parts of the Gulf Coast, we should expect to see large inventory draws once again this week. It may take a couple of weeks for refineries and crude producers in the region to be able to restart operations. Inventories are likely to continue to push lower, providing an additional layer of support for prices. 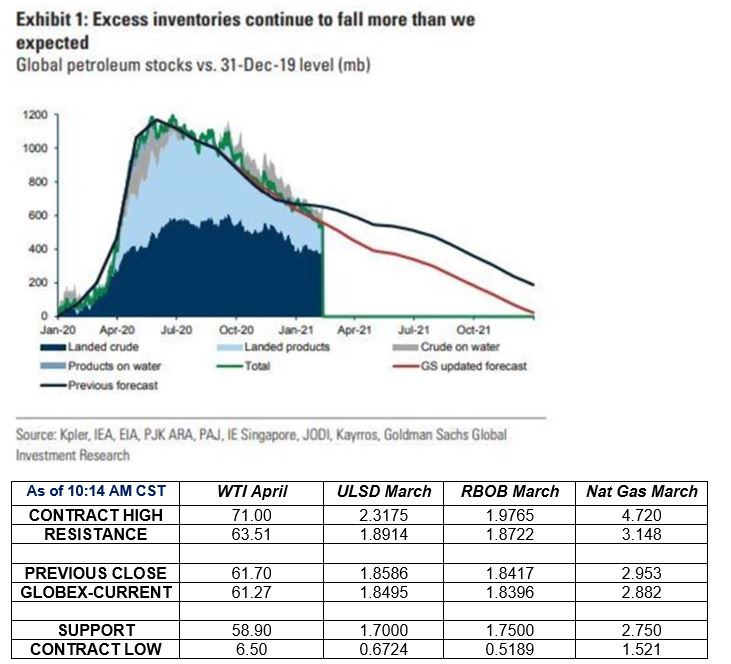