2.24.21 The energy complex continues to push higher this morning ahead of the Weekly Petroleum Status Report from the EIA

Outlook: The energy complex continues to push higher this morning ahead of the Weekly Petroleum Status Report from the EIA. The report will be released at 9:30am CST. Industry expectations are calling for large draws across the board due to the winter weather that shut down production and refining capacity in Texas last week. Yesterday Federal Reserve Chairman Jerome Powell stated that the economic recovery was “far from complete” and that the future still remains uncertain. His commentary should add an additional level of support for the $1.9 trillion stimulus package that is currently making its way through committees in the U.S. House of Representatives. It is expected that the House will pass the relief measure on Friday or Saturday, where it will then head to the Senate. A more contentious negotiation of what is included in the bill is expected to take place, as Democrats hold the thinnest of majorities. In regards to Covid vaccines, the Johnson & Johnson single shot vaccine is effective at preventing moderate and severe cases of Covid-19, according to an analysis of trial data published by the FDA today. The J&J vaccine is 66% effective against the virus, and 100% effective against hospitalizations. The FDA’s Vaccines and Related Biological Products Advisory Committee is scheduled to meet on Friday, where a vote will be held on whether to recommend the Johnson & Johnson vaccine for emergency use approval. It is likely the committee will recommend the vaccine for emergency use, where it is then likely to be granted by the FDA, as they have signaled a willingness to grant any Covid-19 vaccine an emergency use authorization so long as its proven safe and is at least 50% effective. Johnson & Johnson are prepared to ship 20 million doses by the end of March, pending the approval. Equities have had a rocky start to today’s session as all three major averages are trading below even.

Values of both D4 and D6 RINS have continued to rise. D4 RINs recently traded as high as $1.20, while the D4 ethanol RIN has traded over $1.00. RINs are used for compliance. The Renewable Fuels Standard requires obligated parties to either blend a certain amount of biofuel into their fuel, or purchase enough credits in the secondary market. Small refiners can file for an exemption if the price of RINs has caused financial harm. Those exemptions are handed out by the EPA and have been a topic of much discussion from both the corn and oil lobbying groups in Washington. 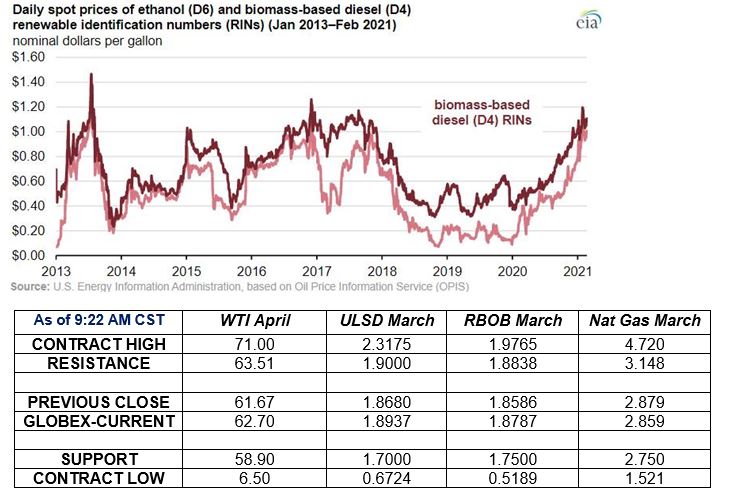