2.25.21 The energy complex has taken a bit of a breather this morning, as crude has traded both sides of even, while product markets are trading in negative territory

Outlook: The energy complex has taken a bit of a breather this morning, as crude has traded both sides of even, while product markets are trading in negative territory. Despite the small setback, prices are near 13 month highs. Giving some support this morning comes from yesterday’s EIA report. They showed that U.S. crude oil production fell dramatically last week, largely due to the frigid winter weather that was experienced throughout Texas and parts of the Gulf Coast. Refinery rates also fell sharply last week. It is likely that production and refining capacity will take a few weeks, or perhaps even longer, before they return to normal. Preventing a steeper sell-off is an assurance from the U.S. Federal Reserve that interest rates will stay low for the foreseeable future, which has helped pressure the dollar lower this morning. A weak dollar typically pushes the price of crude oil higher. Next week OPEC+ will meet virtually, where the group will discuss production quotas for April. it is expected that Saudi Arabia will stop its voluntary 1.0 million bpd output cut in April. OPEC+ will also likely discuss increasing output by an additional 500,000 bpd. An extra 1.5 million bpd in April could give the market some pause, but the additional supply is likely to be viewed as acceptable to the market and is unlikely to cause any dramatic sell-off. On Friday the FDA’s Vaccines and Related Biological Products Advisory Committee is scheduled to meet. The panel will likely grant Johnson & Johnson an emergency use authorization for it’s single-dose Covid-19 vaccine. Johnson & Johnson has stated that they have around 20 million doses that could be delivered by the end of March. Equities have had a mixed start to the session. The DJIA had hit a record high in yesterday’s session, but has fallen as much as 200 points today. All three major averages are trading well below even. 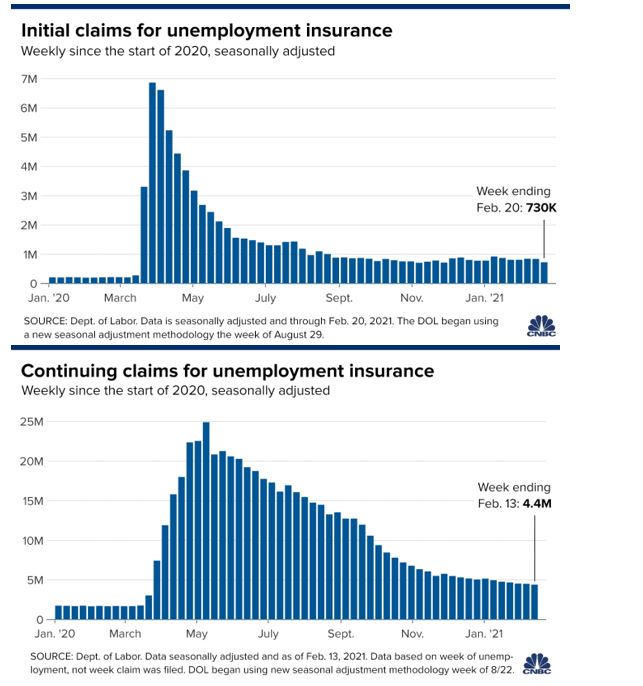