3.1.21  The energy complex has been slightly mixed this morning as crude and products have traded both sides of even

Outlook: The energy complex has been slightly mixed this morning as crude and products have traded both sides of even. Crude was up more than $1 per barrel earlier in the session. A strengthening dollar is adding some pressure to the complex. Also causing some pause is the OPEC+ meeting scheduled for Thursday of this week. The cartel is scheduled to meet virtually, where they will discuss production quotas for April. It is widely expected that the group will agree to increase production by 500,000 bpd next month. Saudi Arabia is also likely to unwind its 1.0 million bpd voluntary production cut. Traders will be keeping a keen eye on any announcements made from OPEC+. On Friday evening the FDA’s Vaccines and Related Biological Products Advisory Committee voted 22-0 in recommending the Johnson & Johnson coronavirus vaccine for an emergency use authorization. The FDA authorized the vaccine on Saturday. Advisors to the CDC voted on Sunday to recommend the vaccine as well. 3.9 million doses of the single-shot vaccine will be distributed immediately, with Tuesday morning likely being when the first vaccinations will be begin. The Johnson & Johnson vaccine is much easier to transport when compared to the Moderna and Pfizer vaccines, as it does not have to be shipped and stored at as low of temperatures. Johnson & Johnson expects to ship around 20 million doses by the end of the month. On Saturday the U.S. House of Representatives passed the $1.9 trillion coronavirus relief package. The bill will now be sent to the Senate, where a more heated debate is likely to occur as Democrats hold the thinnest of majorities. Senate Majority Leader Chuck Schumer has stated that the bill will be passed before the March 14 deadline when unemployment benefits expire. Equity markets have leaped higher as Treasury yields have retreated from the high’s experienced last week. All three major averages are trading well above even, with the DJIA up over 650 points as of 10:00am.

U.S. providers are administering about 1.74 million Covid-19 vaccines each day on average. President Biden has pledged that the U.S. would administer 100 million doses by his 100th day in office. At the current pace, that goal would be achieved. With the Johnson & Johnson vaccine added to the mix, and the company stating around 20 million doses would be distributed by the end of March, it is likely the number of vaccines administered each day will continue to rise. Both Pfizer and Moderna also have plans to increase production in March and April, which would nearly double what they are currently producing. 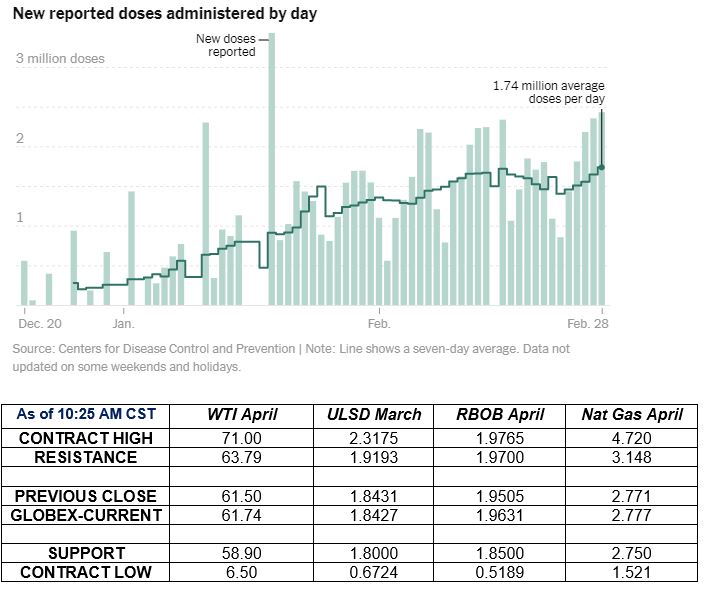