3.2.21 The energy complex has pushed slightly higher this morning as crude and products trade just above even

Outlook: The energy complex has pushed slightly higher this morning as crude and products trade just above even. The market has been moderately steady as we await a decision from OPEC+. The Joint Technical Committee is meeting today, and the Joint Ministerial Monitoring Committee will meet tomorrow. The JTC reviews the fundamental aspect of the market, as well as measuring compliance among members of the group. The OPEC+ oil ministers will meet on Thursday where it is widely expected that the group will increase production by 500,000 bpd in April. Saudi Arabia will also likely unwind its 1.0 million bpd voluntary production cut in April as well. OPEC’s Secretary General Mohammad Barkindo said that the group sees the market outlook as positive, but downside risks due to the pandemic still exist. Barkindo also stated that the group sees oil demand growth this year at 5.8 million bpd to about 96 million bpd total. Prior to the pandemic, global oil demand was at about 100 million bpd. Positive vaccine data from the U.K. has given the energy complex a bit of a lift this morning, as researchers in the country have determined that the Pfizer and AstraZeneca vaccines are effective even after just one dose. Data from a study that started in January has showed that protection against symptomatic Covid-19 four weeks after the first dose ranged between 57% - 61% for the Pfizer vaccine, and 60% - 73% for the AstraZeneca shot. Equities have had a somewhat back and forth session thus far, giving back some of the gains seen yesterday. The S&P 500 had its best day since June yesterday, but all three major averages are currently trading below even.

As mentioned above, India’s Petroleum Planning and Analysis Cell is predicting a nearly 10% rise in fuel consumption by March of 2022. India’s economy returned to growth in the fourth quarter of 2020. Diesel fuel consumption accounts for around 45% of the refined fuel demand in the country and is viewed as the fuel of industry and economic growth. With India’s economy expanding, demand for refined fuels should see significant growth. 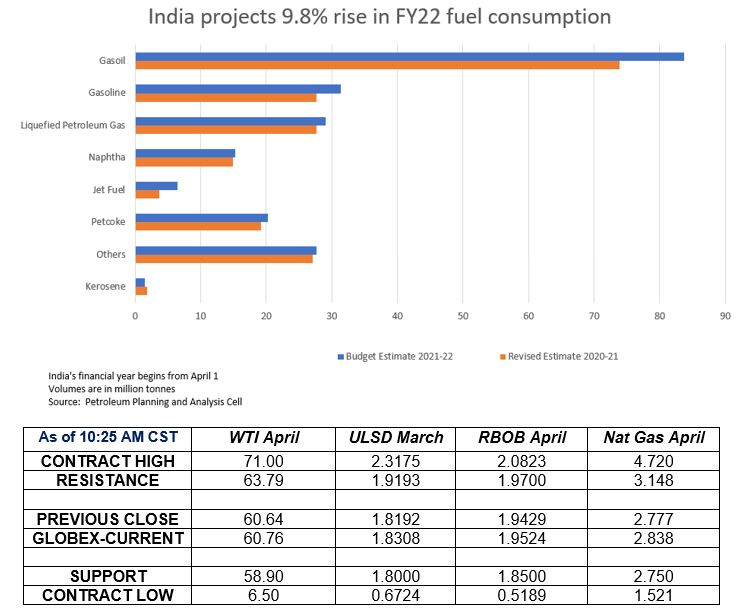