3.4.21  The energy complex has pushed dramatically higher this morning as Saudi Arabia is considering extending its 1.0 million bpd voluntary output cut by an additional month

Outlook: The energy complex has pushed dramatically higher this morning as Saudi Arabia is considering extending its 1.0 million bpd voluntary output cut by an additional month. Alexander Novak, Russia’s Deputy Prime Minister, reportedly told the broader group to be careful, and “not to destroy the balance in the market.” The OPEC+ oil ministers are meeting today. Many industry participants expected OPEC+ to increase production by 500,000 bpd in April, and for the Saudi’s to remove their 1.0 million bpd voluntary cut, effectively increasing output from the group by 1.5 million bpd. But members of the group have stated that although they see a lot of positives in the market, the demand recovery remains fragile. Market participants will eagerly await a final decision from OPEC+, which should happen sometime later today. The U.S. Senate is expected to begin voting on the $1.9 trillion stimulus bill today. The Senate is expected to move into what’s typically known as a “vote-a-rama”, which involves a large number of votes on amendments that can often take several hours. Senate Majority Leader Chuck Schumer has stated that he believes he has the votes to pass the bill, however, with the changes made it will need to be sent back to the House for approval before being sent to the President. Schumer has stated that the Senate will pass the bill and get it signed by President Biden before the March 14 deadline when unemployment benefits expire. Equities have been mixed and choppy this morning. Despite a slighter better than expected unemployment report from the U.S. Department of Labor, all three major averages have traded both sides of even. 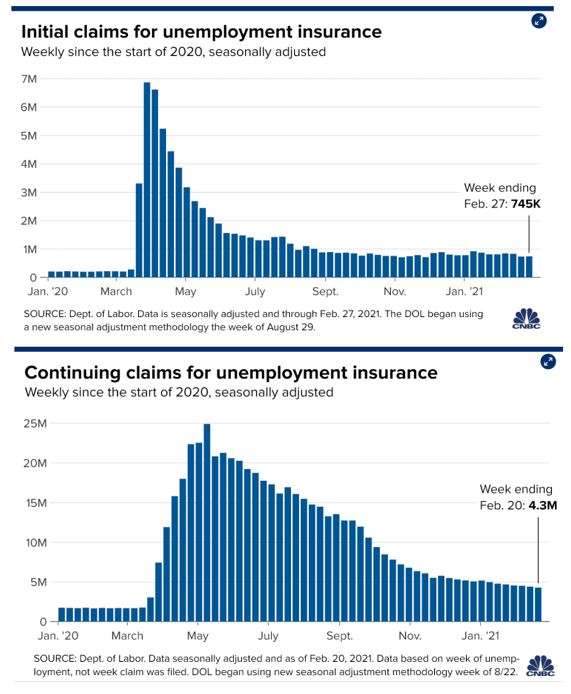