3.5.21 The energy complex continues to push higher as crude oil has moved over $65 per barrel this morning

Outlook: The energy complex continues to push higher as crude oil has moved over $65 per barrel this morning. Crude has reached as high as $66.23, which is its highest level since April 2019. Yesterday OPEC+ agreed to keep the majority of the output quotas unchanged for April. The group will allow Russia to increase production by 130,000 bpd, while Kazakhstan’s quota will increase 20,000 bpd to meet local demand. Saudi Arabia decided to maintain its voluntary 1.0 million bpd output cut as well. Following the announcement from OPEC+, Goldman Sachs has raised its Brent crude price forecast by $5 to $75 in Q2, and $80 per barrel in Q3. The U.S. Senate is set to debate the $1.9 trillion stimulus bill today. Senators will reconvene with three hours of debate remaining, before then engaging in the “vote-a-rama” that could stretch late into this evening. Senate Majority Leader Chuck Schumer has stated the bill will be passed and sent back to the House for approval. The relief bill is likely to pass both chambers and be signed by President Biden before the March 14 deadline when unemployment benefits expire. Equity markets are having another mixed and choppy session as the 10-Year U.S. Treasury yield continues to pressure markets. The yield increased to 1.62% earlier in the session. All three major averages had been trading both sides of even, but have since dipped further into negative territory. 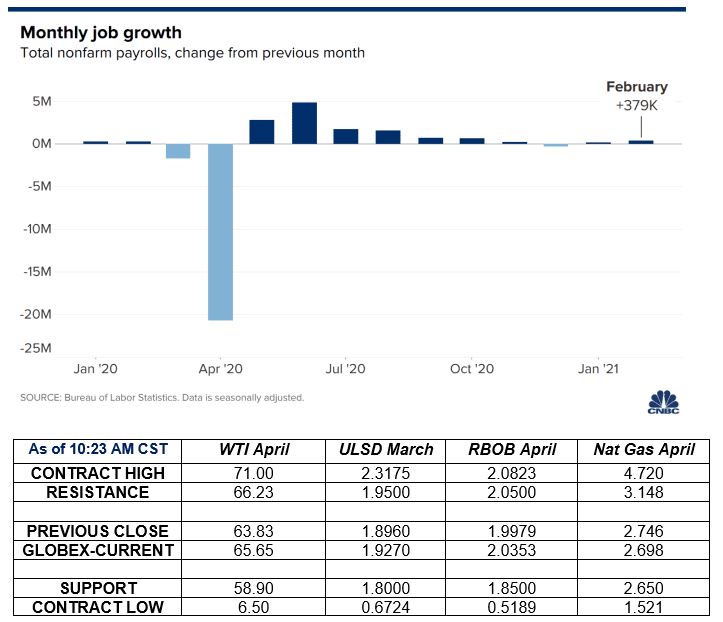