3.8.21 The energy complex has been mixed and choppy this morning, as crude and products have traded both sides of even

Outlook: The energy complex has been mixed and choppy this morning, as crude and products have traded both sides of even. The complex has pushed further into negative territory however, as some of the risk-premium that elevated WTI to nearly $68 per barrel is being removed from the market. May Brent hit as high as $71.38 per barrel in the overnight session, which is the highest level in more than a year. A Saudi Aramco facility was targeted by a drone strike on Sunday. A Houthi military spokesman has stated that the group has claimed responsibility for the attacks. Saudi Arabia’s Ministry of Energy stated that a petroleum tank farm was targeted, but the strikes were reportedly intercepted, causing no damage to the facility. Over the weekend the U.S. Senate voted along party lines to approve the $1.9 trillion Covid-19 relief bill. The U.S. House of Representatives plans to vote on the Senate legislation on Tuesday. The stimulus package is likely to be passed by the House, where it will then be sent to President Biden for approval. President Biden has stated that the bill will be approved early this week, which will allow the $1,400 direct payments to be sent out this month. Equities have been slightly mixed this morning. Treasury yields continue to climb, which have put pressure on the sector. The benchmark 10-year yield has risen steadily over the last few weeks in anticipation of the stimulus bill being passed by Congress. This morning the yield rose 4 basis points to 1.6%, while it started the year under 1%. The DJIA and the S&P 500 are well above even, while the Nasdaq Composite trades both sides.

According to data from the Covid Tracking Project, average cases have fallen 12% in the last 14 days. Daily cases in the U.S. are now averaging just over 40,000. The latest CDC data, as mentioned above, also shows that the U.S. is averaging over 2 million inoculations per day. With both Moderna and Pfizer ramping up production this month and expecting to nearly double capacity, it’s likely we’ll see the average number of vaccinations each day continue to rise. 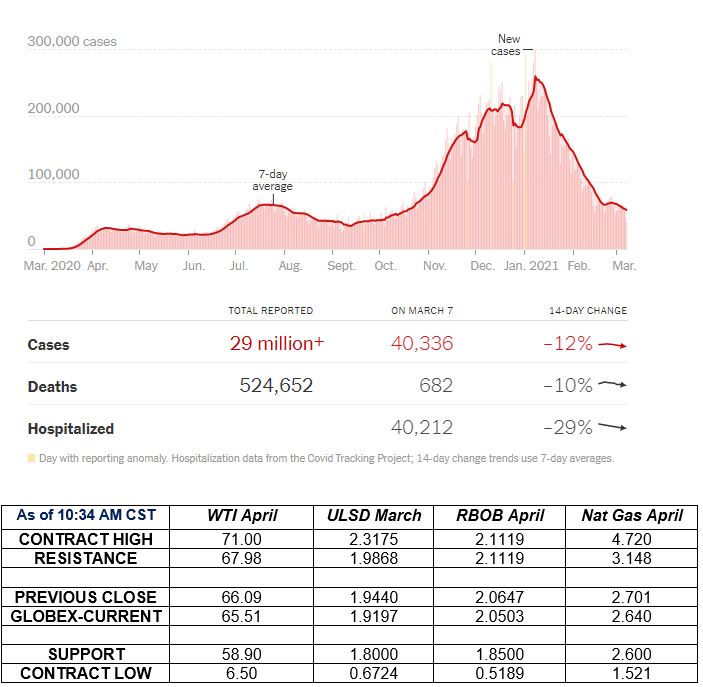