3.10.21 The energy complex has been slightly mixed this morning as the market awaits a fresh round of data from the EIA

Outlook: The energy complex has been slightly mixed this morning as the market awaits a fresh round of data from the EIA. The Weekly Petroleum Status Report will be released this morning at 9:30am CST. Reuters is expecting a small build in crude, and somewhat large draws in refined products. Providing support to the energy complex is the news that the Biden administration is planning to purchase an additional 100 million doses of the Johnson & Johnson Covid-19 vaccine. Johnson & Johnson currently has a deal to provide 100 million doses to the U.S. by the end of June. Government reports have stated that about 3.9 million doses of the single-shot vaccine have already been delivered, and an additional 16 million will be distributed by the end of March. The U.S. House of Representatives is expected to pass the $1.9 trillion coronavirus relief bill later today. Once the resolution is passed by the House, it will be sent to President Biden for approval. Biden is expected to sign the bill before the weekend, as unemployment benefits expire on March 14. Equities are skyrocketing this morning, as all three major averages are trading well above even. The DJIA hit an intra-day record high earlier in the session.

The 10-year U.S. Treasury yield hit a 13-month high of 1.6% earlier in the week. The yield was around 1% in January. The benchmark yield rate is considered an indicator of investor sentiment on the economy. 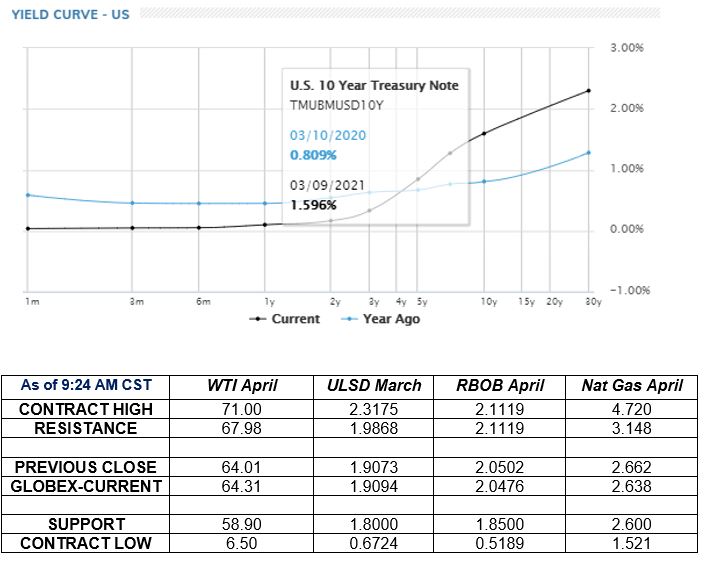