3.11.21 The energy complex has pushed aggressively higher this morning, as crude and products are all trading well above even

Outlook: The energy complex has pushed aggressively higher this morning, as crude and products are all trading well above even. Crude is up over $1 per barrel, April RBOB is trading up about 5 cents on the day, and nearby ULSD is up about 2.5 cents. Large draws in refined products as reported by the EIA yesterday morning have brought some upward momentum to the complex. A weakening dollar is also providing some support, as treasury yields have retreated from recent highs, easing investors worries of inflation. Yesterday the U.S. Department of Labor reported that the Consumer Price Index for February rose 0.4%. The CPI was mostly in-line with economists estimates. Yesterday the U.S. House of Representatives passed the $1.9 trillion Covid-19 relief bill. The bill will now be sent to President Biden for approval. Biden is expected to sign the bill on Friday, as unemployment benefits expire on March 14. Those who qualify for the $1,400 direct payments could start seeing them hit their bank account via direct deposit before the end of the month. Biden is also expected to give his first primetime address this evening, where it is expected that he will lay out the administration’s plan for combatting the pandemic going forward. Today marks the 1 year anniversary of widespread coronavirus-caused lockdowns. Equities are having another record session, as a slightly better than expected jobless claims report is providing a layer of support to the sector. The DJIA is up about 300 points and has hit another intraday record high. 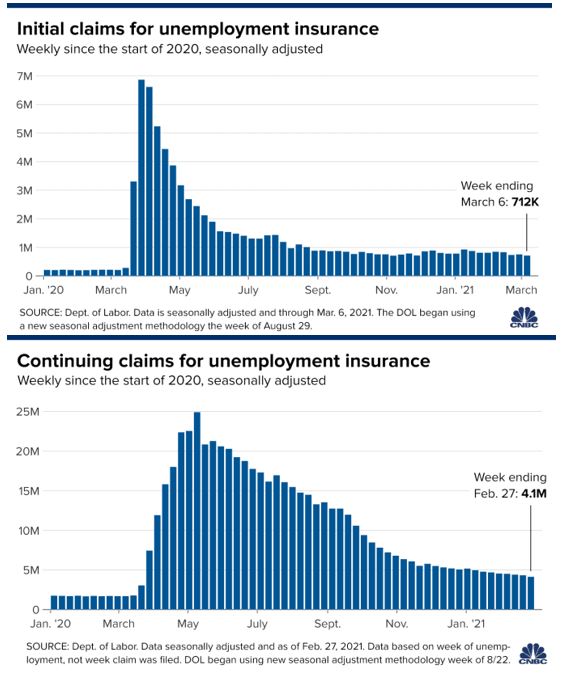