3.12.21 The energy complex is slightly mixed this morning, as crude and products have traded both sides of even

Outlook: The energy complex is slightly mixed this morning, as crude and products have traded both sides of even. Some of the negative price action today is likely related to some profit taking, as WTI has risen over $5 per barrel since the lows seen in the first week of March. Yesterday afternoon President Biden signed the $1.9 trillion Covid-19 relief bill into law. Shortly after the signing took place, the White House Press Secretary Jen Psaki stated that the $1,400 direct payments to those that qualify could happen as early as this weekend. The bill included the extension of unemployment benefits until September 6, as well as an expansion of the child tax credit. With more money in circulation, inflation worries have caused the 10-Year Treasury yield to spike to its highest level in more than a year. The benchmark note advanced to 1.635% as of 9:45am CST. Yesterday evening President Biden made his first prime-time address since taking office. He stated that all adults will be eligible for a vaccine by May 1, and that a return to normalcy was possible by July 4. Yesterday marked the one-year anniversary of the World Health Organization declaring that the world was in a pandemic. Equities have had a mixed start to the session, as the DJIA has held onto relatively small gains, while the S&P 500 and the Nasdaq Composite have fallen below even.

The benchmark 10-year Treasury yield is closely watched as it is an indicator of investor confidence. The 10-year yield has risen dramatically in recent weeks, increasing from about 1% at the end of January to over 1.6% today. Concerns that more money being injected to the economy will cause inflation have pressured the yield higher. 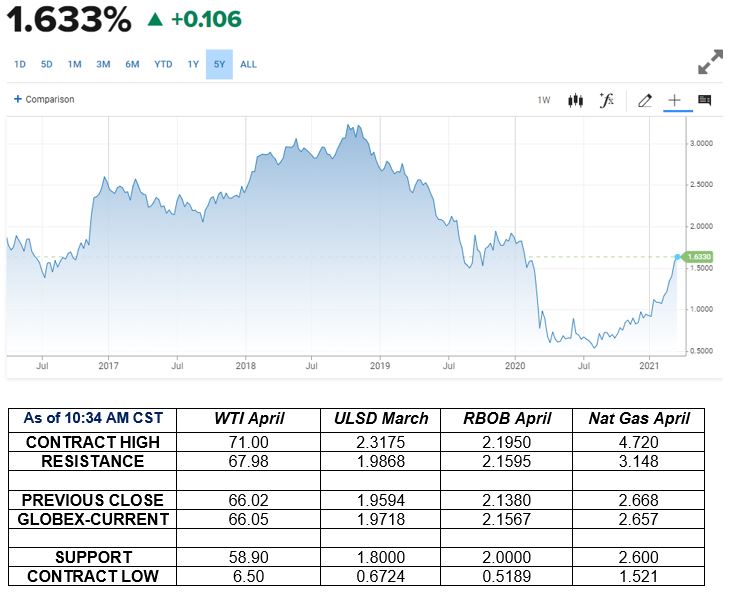