3.16.21 The energy complex has pushed into negative territory this morning, as crude and products are all trading well below even

Outlook: The energy complex has pushed into negative territory this morning, as crude and products are all trading well below even. Another crude oil build is expected to be reported this week by the EIA. Rising crude inventories are adding pressure to the complex. The Reuters poll of analysts and traders is anticipating that the EIA will report a 2.715 million barrel build in U.S. crude oil stocks for the week ending March 12. Crude inventories have risen over 35 million barrels in the last two weeks due to the weather event in Texas that caused refineries to shutdown. A strengthening dollar is also adding an additional layer of downside pressure this morning. The AstraZeneca vaccine is being suspended throughout much of Europe, which is likely to cause additional delays in regard to vaccine rollouts throughout the continent. Analysts at Moody’s Analytics have stated that Asia’s economic recovery could slow down as more countries are suspending the vaccine. Moderna has started studying the effects of its Covid-19 vaccine in children from 6 months to 11 years old. Moderna plans to enroll around 6,750 children in the U.S. and Canada in the trial. Moderna began testing the two-dose vaccine on adolescents between the ages of 12 and 18 in December 2020. Equities have had a mixed session this morning, as the S&P 500 and the Nasdaq Composite are trading in positive territory, while the DJIA has fallen below even. Inflation concerns and rising interest rates will continue to play an incremental part in investor sentiment going forward. The Federal Reserve is holding a two-day meeting starting today, with Fed chairman Jerome Powell expected to speak tomorrow. The Fed is expected to release new economic and interest rate forecasts.

The AstraZeneca vaccine is being suspended in many countries in Europe, with Sweden and Latvia being the latest to halt use due to concerns over blood clots. Vaccine rollouts in Europe have been slow, with many countries being placed back under lockdown to help halt the spread of the virus. Fuel demand in parts of Europe are likely to continue to be weak due to lockdowns and rising Covid-19 cases. 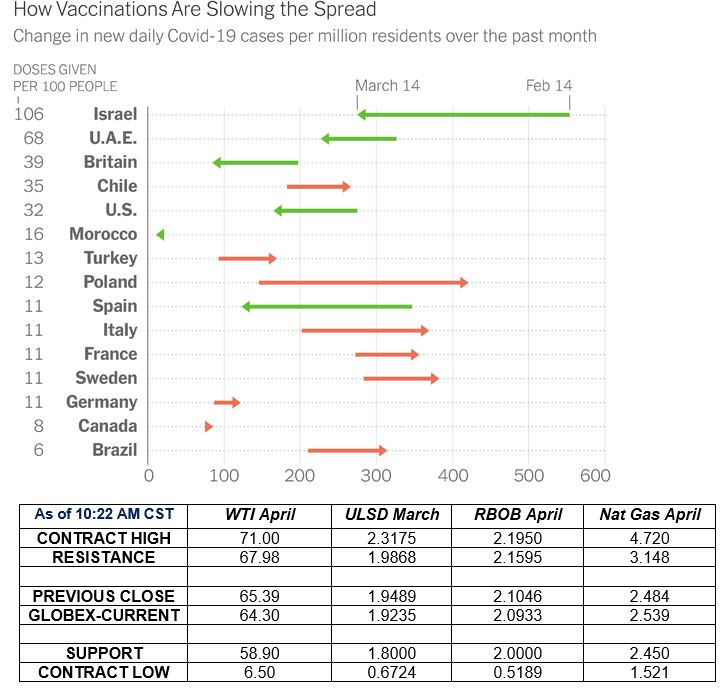