3.19.21 The energy complex has been mixed and choppy this morning, as crude and products have traded both sides of even

Outlook: The energy complex has been mixed and choppy this morning, as crude and products have traded both sides of even. Wild swings have been experienced this morning. April crude traded as low as $58.94 per barrel before charging back to above $60 per barrel. A similar story can be told for both RBOB and ULSD. April RBOB was down almost 5 cents earlier in the session before pushing closer to even. April ULSD was down almost 3 cents on the day, and is now up about 1.5 cents. Weaker demand in Europe due to a slow rollout of covid-19 vaccines has pressured the complex. France has re-imposed new lockdowns to attempt to slow the spread of the virus. Around 21 million people in 16 areas of France will be placed under lockdown beginning tonight at midnight, as the country has experienced more than 35,000 new cases in the last 24 hours. A “third wave” in France is looking increasingly likely, according to health officials. AstraZeneca shots will resume in Germany, France, Italy, Spain, and several other members of the EU following a new report from the European Medicines Agency. They stated the benefits of the vaccine “continue to outweigh the risk of side effects.” They also stated that the AstraZeneca vaccine is not associated with an increased risk for blood clots. Equities are having a mixed start to the session as well, as the DJIA is down around 300 points, while the Nasdaq Composite trades closer to even. Equities are being pressured due to a decision from the Federal Reserve to not extend a pandemic-era rule that allowed banks to hold less capital against Treasury's and other holdings.

The benchmark 10-year Treasury yield hit 1.75% yesterday, but has since fallen back slightly. Yields are still around a 14-month high however. Rising bond yields, which can signal fears of inflation, can cause high growth stocks to appear less attractive to investors. 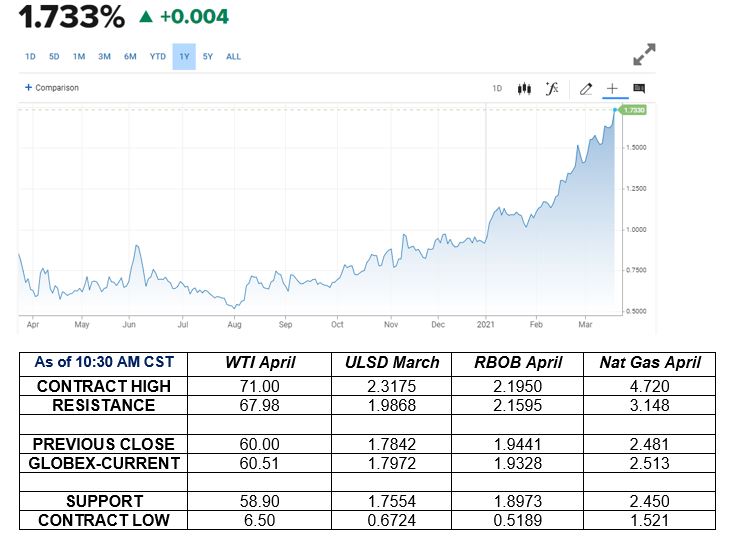